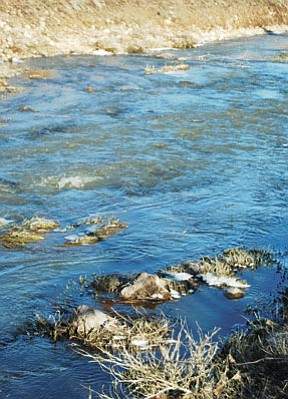 Water flows through Cataract Creek in Williams, thanks to a plentiful winter.

Water rights for the city's Dogtown I and III wells were brought into question this week, after Williams officials discovered a location error concerning their wells while in negotiations to procure additional water sources. According to officials, water from the wells are being pulled from the Verde River Basin, which technically does not belong to the city of Williams, but to communities in the Verde Valley area. The mistake came as a result of the search for new water sources in the Williams area and, in particular, the search for suitable drilling locations south of town. The search for water has, to date, cost the city over $13 million.

"Williams became aware that we might have two water wells south of a line defining the Verde River Basin, so to speak, back in August of 2007. When we discovered that, in fact, there was a line that we were south of, we decided first of all that we need to go to the Department of Water Resources (DRW), talk to them a little bit, see what their advice was," said Williams City Manager Dennis Wells. "(The wells) were permitted by the Arizona Department of Water Resources. They were under the impression that we were north of the line and they did not consider it a problem. They did not discover it until we pointed it out to them."

Williams officials met with DRW, who sent them to meet with representatives from the Salt River Project (SRP) late last summer.

State Representative Lucy Mason, along with Williams Mayor Ken Edes and Wells, introduced House Bill 2772 during a meeting of the Water and Agricultural Sub-Committee March 6. The bill, should it be passed in the state legislature, would transfer a portion of the Dogtown I and III water rights from the Verde River Basin to the Coconino Plateau Basin. If state legislators do not pass the bill the Dogtown wells may face closure, Wells said. The bill is expected to go before the state legislature by June at the latest.

"We now have a bill, which basically sanctifies these water wells and allows Williams to utilize them as long as we only withdraw a certain quantity of water," Wells said. "The quantity of water we're talking about that we do have some approval, so to speak, from the Salt River Project, is 700-acre feet. At the current size of Williams, that amount of water will carry us through a drought year. The wild card in all of this is that, in the future, we will have more people and, as we have more people living here, we'll be utilizing more water. For that reason, Williams will need to continue its search for water and try to locate another drilling site and then drill one, possible two or three more water wells to secure our water future."

Wells said there were a number of possible choices when it comes to new well sites.

"I think some of the obvious choices would include nearby or close by our raw line that comes from Dogtown that also carries our well water. It's not just a water well that you drill, you also have to transport that water, once you find it, into town," Wells said. "We will contact USGS and perhaps do some research and perhaps even hire a private hydrologist or private consultant to take a look at the Williams area."

Wells said the location of the well sites were fairly close to a line that distinguishes a boundary between the two water basins.

"The specific law that we're in violation of with these water wells is a 1993 state statue that basically prohibits transportation of water across a ground water basin boundary. The water wells are just barely south of the line itself. One is literally a stone's throw from the line and the other one is about, I think, 2,800 feet," he said.

According to Clarkdale Mayor Doug Von Gausig, city officials there believe the mistake was an honest one.

"Clarkdale is not objecting to the legislation. We just want it tightened up a little here and there. We don't believe Williams did anything knowingly," Von Gausig said, adding that city officials in Clarkdale sent a letter to Mason that asked for a number of amendments to the bill before it was passed.

"The town of Clarkdale made comment to that committee and sent a letter to Lucy Mason to make the legislation fit our needs, we didn't object to it however," Von Gausig said.

Among the items Von Gausig would like to see added to the bill is a population cap of 8,000 - a figure worked out between Von Gausig and Williams Mayor Ken Edes. Other additions include better communication between municipalities when it comes to drilling large-scale wells, monitoring devices and that all other water sources in Williams be used to the maximum amount prior to utilizing water from the Dogtown wells.

Besides wells, Williams currently operate five reservoirs throughout the city. Water demand in Williams varies depending on the time of year, according to city officials. In the summer months, water usage can reach as high as one million gallons per day. Usage drops in the winter, however, and can fluctuate between 4,000 to 5,000 gallons a day.

"Our reservoirs, for all practical purposes, are now completely full. There are five reservoirs, Dogtown, Kaibab, Santa Fe, Cataract and the City Dam. Of those five, Dogtown is the largest and, oftentimes, is one of the last ones to fill. Usually Kaibab is the very last to fill, because it's downstream from Dogtown," Wells said. "If we were to receive very little or no precipitation now for18 months to two years, we'd have sufficient water in the reservoirs. If we again encounter dry weather conditions then those weather reservoirs can go down rather quickly."

Wells said the mistake was discovered during land negotiations with the Pouquette family for possible future well locations.

"We were working to obtain a drilling site and the attorney for the Pouqette family mentioned that he had been speaking to a fellow attorney that is also a water attorney and this water attorney was questioning whether or not Williams was inside the correct ground water basin," Wells said. "Once this was brought up, we felt it was necessary to check into it ourselves and see if this line did exist and if we were, in fact, south of the line. We found that we were and that's when we realized that we needed to contact the state of Arizona. Once we did that then we realized also that we needed to hire a water attorney to help us craft a piece of legislation that would allow us to utilize the water from these two water wells. If this legislation passes, which we hope that it will this session, what it will do is, there will be no real incentive for us to put another well there, because the two current wells, if they're run all out, would produce about 700-acre feet, so there's no real incentive for us to drill another well in that area."

Due to this fact, negotiations for land with the Pouquette family may become a moot point, as city officials will now have to look elsewhere for more water. Wells said members of Williams City Council, however, would make a final decision on the Pouquette land.