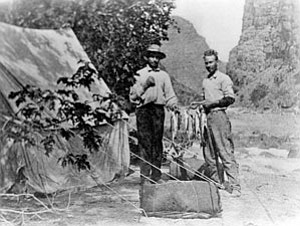 The Kolb brothers, Ellsworth and Emery, on the river.

Unavailable for more than 30 years, one of the west's greatest river tales is back in print in a new edition recently released by Grand Canyon Association.

"Through the Grand Canyon from Wyoming to Mexico" is Ellsworth Kolb's descriptive, sometimes self-depreciating and often playful account of his and brother Emery's famous trip down the Green and Colorado rivers in the winter of 1911-12. First released by MacMillan in 1914, it went through its 27th and final reprinting by the University of Arizona Press in 1974.

"It's considered one of the classic adventure stories of the American west," said GCA Managing Editor Todd Berger. "Not many people had gone down the Colorado River at that time. They not only went down but they filmed themselves doing it."

GCA decided to re-release the book two years ago, and to reproduce it as faithfully as possible. Instead of trying to match the type and reset it exactly, they made digital scans of the text from the original first edition.

They turned to Northern Arizona University's Cline Library, which curates the Kolb collection, for the negatives for images used in the book. Berger said that in all but two cases, they were able to locate originals. For those they couldn't locate, they were able to find nearly identical replacements taken at the same time and the same place.

The cover design is also close to the original, with a hand-tinted photo taken at the mouth of Havasu Creek.

"We let everything stand exactly as it was in the original," said Berger.

The brothers came to Arizona from their native Pennsylvania in 1901 and 1902, hoping to start a photography business on the South Rim. But under pressure from the Fred Harvey Co. and Santa Fe Railway, the U.S. Forester denied them permission to operate.

They went around him instead, working out an agreement with prospector Ralph Cameron in 1903 to set up their studio on his mining claim at the Bright Angel trailhead.

Over the next several decades, concessioners and the Park Service relentlessly and unsuccessfully tried to make the Kolbs - particularly outspoken Emery - go away.

The river trip helped contribute to the studio's longevity by securing the brothers' reputations in true western spirit and providing the footage for the hugely popular movie that was shown three times a day from 1915 until Emery'd death in 1976.

The brothers took their trip at a time when imaginations were wakening to fantastic images and stories from that new part of the United States known as the Great American Desert.

"The Big Trip," as the Kolbs called it, would be the eighth significant run on the Colorado River through Grand Canyon and the first to successfully retrace Maj. John Wesley Powell's 1,200-mile expedition from Green River City, Wyo., to Needles, Calif., some three decades earlier.

It would also be the first to be documented in the exciting, new medium of motion picture photography. As Ellsworth wrote in the first chapter of his book, their aim was to "... bring out a record of the Colorado as it is, a live thing, armed as it were with teeth, ready to crush and devour."

The Kolbs set out in September of 1911, in two custom-built boats weighing 500 pounds each and a hand-crank movie camera that represented the cutting-edge technology of the time.

They also had two cameras with film and two with glass plates, which they also carried along with a darkroom tent and chemicals.

While their cargo was more delicate than Powell's, they did have some advantages, notes Richard Quataroli, special collections librarian at Cline; maps, for instance, and better boats, designed for the trip.

They also had the benefit of stops along the way in territory that was wilderness in Powell's time, including a one-month layover at their own home at the top of the Bright Angel Trail.

"It was easier to get supplies and things like that," he said. "They had better boats and they were better equipped."

In all, the Kolbs spent 101 days on the river and navigated over 365 major rapids, taking pictures and filming all the way - sometimes before throwing a needed life preserver.

"For river movies, mishaps are great to get on film," said Quataroli. "If you're on a river trip where nothing happens, you just don't have as many stories."

When Santa Fe and Fred Harvey Co. managed to block the Kolbs from screening their film at Grand Canyon, the brothers instead devoted their energy to getting it before audiences in the east, including to an over-capacity gathering of the National Geographic Society.

The tours east, combined with the release of Ellsworth's book, raised popular support and powerful allies as well. In 1915, they began showing the film and would, three times daily, until Emery's death in 1976.

One prominent supporter was the popular western author Owen Wister, who wrote "The Virginian," considered the Granddaddy of western novels. In his foreword to Ellsworth's book, he chastised the railway for its stance against the Kolbs

"Why, because the brothers Kolb are independent, crush their little studio, stifle out their little trade, push these genuine artists and lovers of nature away from the Canyon that nobody has photographed or can photograph so well?" he wrote. "... You're hurting your own cause."