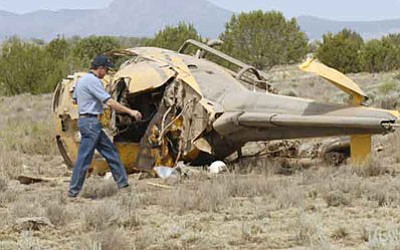 The Daily Courier/Jo. L. Keener <b>FAA Investigator in Charge Renato Lutz walks to the downed medical helicopter crash scene Friday morning just south of Ash Fork. The chopper crashed early Friday morning while responding to a motorcycle accident with three persons on board. All three were transported to hospitals and survived the crash.</b>

Three Air Evac crewmembers were injured when their medical helicopter crashed early Friday morning about 100 yards off Highway 89 north of Paulden. According to a Yavapai County Sheriff's Office press release Department of Public Safety officials reported the crash involving an Air Evac helicopter based out of the Prescott Airport. YCSO deputies responded to the crash site at approximately 4 a.m. in the vicinity of the Drake overpass near milepost 361.According to initial reports, the crash occurred as the helicopter was traveling to pick up a patient involved in a motorcycle accident near Ash Fork. No patients were on board at the time. Emergency medical personnel were already in the area responding to the reported motorcycle accident. Jonathan Collier with Air Evac, Inc. said the pilot, flight paramedic and flight nurse were injured. All three crewmembers were taken to Flagstaff Medical Center where two were listed in serious condition. The two more seriously injured patients were taken by air while the remaining crewmember was transported by ambulance. None of the injuries appear to be life threatening. The National Transportation Safety Board was notified and expected on scene around 10 a.m. The cause of the crash is under investigation.