Big fun planned for the Fourth
No fireworks, but plenty of other events planned 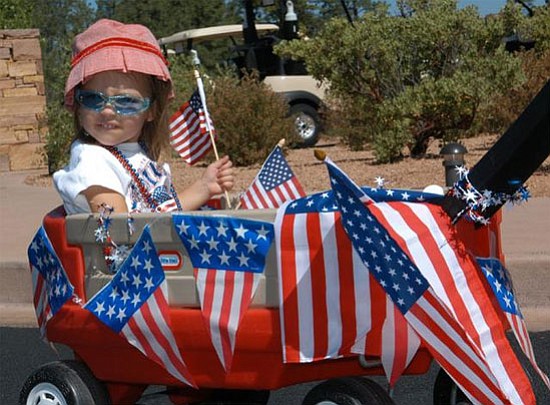 Despite the cancellation of fireworks in Williams this Fourth of July, a number of other events are on tap for the area, including the ever-popular Fourth of July parade, which kicks off at 6 p.m. Other events are also planned for the area that officials hope will still bring big numbers to the community despite the prospect of quiet skies at dark. According to Williams-Grand Canyon Chamber of Commerce Events Coordinator Sue Atkinson, plenty of events are still planned in Williams this Independence Day.

"Something new that we're going to try this year is sidewalk sales throughout downtown," Atkinson said. "City council gave approval for merchants to do sidewalk sales."

She said the Fourth of July committee would also offer a business-decorating contest for commerce along the parade route.

"They could get recognition in the newspaper for being the winner, a $25 certifi-check gift certificate and we're going to make up a sign and have a big red, white and blue ribbon that they can display in their window naming them as the best decorated business in town," Atkinson said.

Parade organizers are hoping to beat the large numbers that came out for last year's parade, in which 52 entries, totaling over 270 individuals, entered the parade.

"This year we have a nice addition, the 108th Army Band will come up from Phoenix. They're a 40-piece marching band. I'm excited about that," Atkinson said. "It's going to be kicked off by the Arizona Skyhawk Skyjumpers. Grand Canyon Railway® is our presenting sponsor this year for the parade. Pepsi is also a sponsor; they're donating product and the Pepsi cart. The city of Williams City Council voted to sponsor the parade."

Atkinson said the theme for this year's parade is "Faces of Freedom."

"We've asked some people in town to volunteer and dress up as some of the past presidents," she said. "We're going to have Abe Lincoln, Teddy Roosevelt, Uncle Sam and we're still trying to find someone to be George Washington."

Announcer stands for the parade will be located at two locations this year: one at Old Smokey's and another near First Street along Route 66.

"Josh and Dan Barnes are going to set up. Last year he had all his equipment out and they were playing music," Atkinson said. "He'll have a script this year so he'll be able to announce the parade at that end. We're moving the announcer stand this year up one block. We're trying to spread out the parade route a little more and get some more people down on the east end of town."

Other plans include a possible flyover, in which three planes will trail smoke contrails over the community. The Northern Arizona Antique Tractor and Engine association will also display a number of tractors on Second Street during the upcoming holiday. The non-profit group promotes the restoration, collection, preservation and exhibition of antique tractors, engines, power-driven machines and any other equipment of historical value. The group will also participate in the Fourth of July parade.

Other events include a fundraiser for Ellie Krombeen, who will attend the Miss Teen USA competition later this year. The fundraiser will be held at the Williams Police Station in the parking lot July 4-6 beginning at 11 a.m. Food and drinks will be offered.

Other entries in the parade include the Route 66 Car Club, members of which will show off roughly 15 cars in the parade, 100-plus kids with the Williams Recreation Center and plenty more.

"The grand marshals are the different people that will dress up as past presidents," Atkinson said. "Those are the grand marshals, the Faces of Freedom. The honorary grand marshal is Herb Johnson, who is the Coconino County Sheriff Volunteer, who is involved in everything we do in our community."

The beloved ice cream social will also be held July 4 from 1-3 p.m., as well as a free swim at the Williams Aquatic Center from 1-4 p.m.

"The tractor show will be over on Second Street again from Friday to Saturday, all their old antique tractors and of course the parade at 6 p.m.," Atkinson said. The Williams Rotary barbecue is also slated for the Visitor Center at the west end of the parking lot from 3-6 p.m., featuring hamburgers and hot dogs, as well as games for the kids.

"It will be a block party barbecue and we're going to try and get some inflatables for the kids, do a duck pond (and) I'm trying to track down a dunk tank right now," Atkinson said. "So far there has been a positive reaction. If that works we will have the barbecue up here this year instead of down at the rodeo grounds."

Big events planned for 2009 in Williams
Plans under way for a spectacular Fourth of July
Shaping up to be a big Fourth celebration
Happy Fourth of July, Williams
Big Tusayan Fourth planned
Event Calendar