No fireworks this Fourth
No suitable location found for show 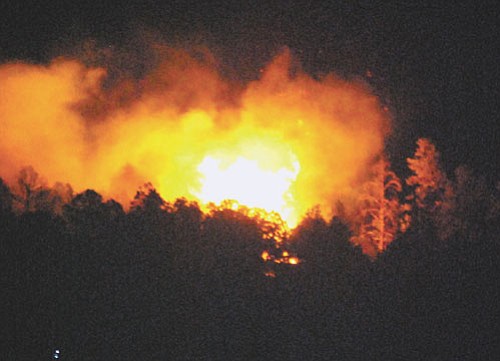 Officials with the city of Williams said they will not hold a fireworks show this Fourth of July. Despite a wetter than average year, concern is still high for the possibilities of fire due to the fireworks and a safe location for the show could not be found, according to city representatives.

According to Dent, who spoke to members of Williams Council June 11, officials will not be able to use the Gonzalez Lake property this year.

"It sounds like it's not an option," he said. "Our recommendation is, if we can't do it there, just postpone it until next year."

Council member Kevin Young asked if improving weather conditions would improve the odds when it came to whether or not fire officials would change their minds. While Dent said fire officials would be open to offering fireworks this year, they would only do it if the Gonzalez Lake property became available.

"That's the only place that we have enough room to feel comfortable," Dent said.

Council members also asked about shooting off the fireworks in other locations, such as the old sawmill. New homes in the area, however, prevented the location from being considered as an option.

"We could go down to smaller shells, but still, with residents around there we really wouldn't feel comfortable doing it," Dent said. "All the other locations that we looked at - I don't think we'd still be comfortable if we had moisture. They recommend 70 feet for every inch of shell. Last year's location was perfect. If everything would have been perfect, no wind, I think we would have been fine there. The sewer plant is in there now."

Mayor John Moore said that city officials are also looking into the possibility of holding the fireworks show at a later date.

"There's been some suggestion, I understand, about trying to do fireworks at a later time, maybe in August or September," Moore said, adding that even those plans may be a moot point should city officials not get approval to use the Gonzalez property from owners Max and Thelma Biegert.

"We can try to work with Mr. and Mrs. Biegert, see if they'll let us use that at another date," Moore said. "We haven't been very successful so far."

Council members discussed a number of other topics during their regular meeting June 11, including the approval of a $700 sponsorship for the Arizona State Mounted Posse to hold a two-day roping event at the Bob Dean Rodeo Grounds. Council members also approved a $300 sponsorship of the Arizona State Envirothon Western Night. Council members approved the tentative budget for the city of Williams, as well as the approval of a Federal Aviation Administration grant and amendments to the city tax code during the June 11 meeting.

No fireworks this Fourth of July
City opts to axe fireworks
Fireworks display back on
Fireworks, communication and more for city officials
Fire spurs subpoenas for Williams officials
Event Calendar