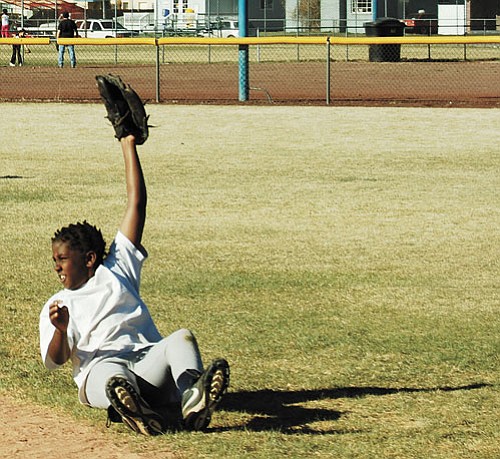 <br>Patrick Whitehurst/WGCN<br> This year’s Little League season in Williams was an exciting one for both the boys and the girls' teams.

It's been a wonderful summer for both the boys and the girls' teams when it comes to Little League baseball and softball. Cureton Park in Williams has been buzzing with ball players, friends and family in recent months. Teams from throughout northern Arizona have come to town to play America's past time in the warm, Williams sun.

The Wiliams Little League Diamondbacks took the league championship in baseball June 5. The win bought the team a chance to play in the recent "Tournament of Champions" held over Father's Day weekend in Chino Valley. The Williams team ended the competition third in the tournament.

In the first game of play, the D-Backs took on Verde Valley, ending the game with a final score of Diamondbacks 9, Verde Valley 7. D-Back Kohl Nixon pitched the majority of the game for Williams, handing over the pitching duties to Coty Baxter in the fifth inning of play. Nixon was three for four at the plate. Baxter went three for four as well, including a home run hit over the fence. Other players that went three for four included Ethan Berry and Colton Grantham.

The third game of the tournament brought an end to the D-Backs winning streak, as they recorded a 12-9 loss against a scrappy Chino Valley team. Baxter managed to hit a second home run over the fence during the game, however, with Kohl Nixon and Ethan Berry hitting back-to-back homers as well in the fifth inning of play. The homers were not enough to ensure a victory for the Williams team; who ended the tournament in third place. D-Backs Leo Lopez and Edgar Duran pitched for the D-Backs in the final game.

Little League officials announced their All Star players for the season for both the 9-10 division and the 11-12 division. Eleven-12 All Star players include Christian Campos, Cody Dick, Colton Grantham, Coty Baxter, Daniel Solberg, Edgar Duran, Ethan Berry, Garret Pettit, Jose Aguilar, Juaquin Salaz, Kohl Nixon and Ralphael Duran. The All Star Tournament for 11-12-year-olds, coached by Herman Nixon and Tiger Grantham, is scheduled for July 1 in Cottonwood. The Williams All Stars are slated to play Prescott Valley beginning at 5 p.m.