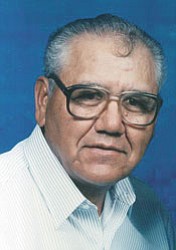 He was the son of Cipriano and Josefa (Contreras) Apodaca; born April 1, 1928 in Socorro, N.M.

Ernesto served his country during World War II as a corporal in the United States Army. For his dedicated service he was awarded the WWII Victory Medal and the Army of Occupation Medal (Japan). He was a member of the American Legion Cordova Post No. 13 in Williams, where he held the positions of vice commander, sergeant of arms and executive committee.

Professionally, he worked as a barber for 17 years, following which he worked for the Williams Park and Recreation as a superintendent.

After taking his retirement, Ernesto spent much of his time traveling, gardening, golfing and tinkering in his garage. He was a devoted husband, father, grandfather, and great-grandfather who will always be loved and adored by his family.

He is preceded in death by his parents; his daughter, Palmira Apodaca; and his brother, Cipriano Apodaca.

Ernesto leaves behind his beloved wife of 58 years, Julia Apodaca of Clarkdale; three daughters, Patricia Mass with her husband, Fred of Phoenix, Irene Hunkler with her husband, John of Flagstaff, and Jeanette Apodaca of Phoenix; his brother, Roman Apodaca of New Mexico; and three sisters, Alicia Rameriz, Rose Bachicha, and Isabella Sanchez, all of New Mexico. He is also survived by four grandchildren and five great-grandchildren.

Funeral services will be held at the Immaculate Conception Catholic Church in Cottonwood, where Ernesto was a faithful member. Services will be held on Friday, June 20, 2008 with the visitation starting at 9 a.m., the Rosary at 9:30 a.m., and the funeral Mass to follow at 10 a.m. Ernesto will be laid to rest at the Williams Cemetery that same afternoon at 1 p.m.

An online guestbook is available at www.westcottfuneralhome.com.