After giving out many, a Pioneer award of his own
Two received society’s Hall of Fame honor 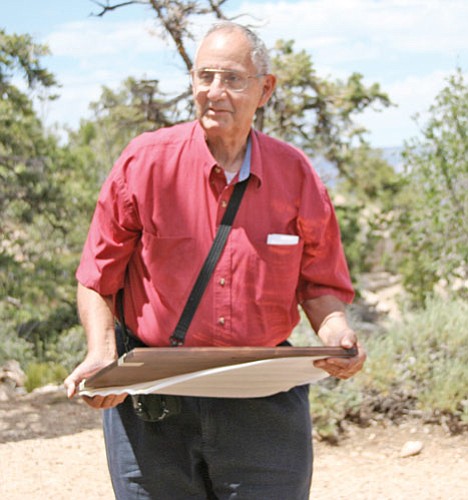 Lee Albertson was recipient of the Historical Society's Pioneer Award.

The society gives the award annually to an individual who has made significant contributions to the understanding of Grand Canyon. Recent past recipients include Gary Ladd, Mike Anderson and Al Richmond.

Albertson has served in board and officer positions since 1996, took a lead role in organizing history symposiums in 2002 and 2007 and helped to establish the Historical Society collection at Northern Arizona University's Cline Library.

"Harvey Butchart mentioned to me once that you have to be dead before they honor you," he quipped.

He recognized his wife, Shirley, for her support over the years and said that he's looking forward to the next history symposium in 2012.

Albertson was one of three honorees recognized at the society's annual picnic at Shoshone Point last Sunday. Two people were also named into the Hall of Fame, which recognizes residents - one living and one deceased - who have contributed significantly to the Grand Canyon community.

These were retired law enforcement ranger Ronnie Gibson and early resident Bert Lauzon, whose 40-year association with Grand Canyon started with a job as laborer and trail guide for William Bass, followed by a position as cameraman for the Kolb brothers on the second part of their famous 1911 run down the Colorado River.

Historical Society President Keith Green said that Gibson was probably best known for his work as the resource officer at Grand Canyon School - "He ate lunch there almost every day," he noted - and for his patrols around the village with his horse, whose saddle was rigged with taillights and turn signals.

Hubert R. Lauzon was hired on by the Kolbs after their original cameraman, James Fagen, succumbed to homesickness and left the trip at the South Rim. In his four decades at the Canyon, he also worked as custodian and toll taker on the Bright Angel Trail, an elected constable and park ranger.

Green said that while the Historical Society has had some noteworthy accomplishments in the past couple of years, the hugely successful 2007 History Symposium at Grand Canyon National Park "just about destroyed the society because we all worked so hard for it that when it was done, nobody wanted to do anything - including being vice president or president or anything."

He credited Susan and George Billingsley of Flagstaff with keeping the society alive and dynamic despite a thin slate of outings last year.

"Nobody had any energy to do anything but at our meeting in October we did work on the bylaws," he said.

In the coming months, the society has several outings planned. On Saturday, Aug. 9, they will take a field trip to the original airport at Red Butte.

On Saturday, Sept. 13, author Fred Swanson will speak at the Shrine of the Ages. He edited the journals of Wall Street attorney and adventurer George Fraser for the book, "Journeys in the Canyon Lands of Utah and Arizona, 1914-1916" and wrote a biography of backcountry guide David Rust.

On the first weekend in October, they plan to travel to Page for a tour of Antelope Canyon and the Powell Museum, led by Cline Special Collections Librarian Richard Quartaroli.

Green said that they are seeking at least three and hopefully five applicants interested in serving on the Historical Society Board that oversees the 178-member group.

"We need a dynamic board, not one that meets just once a year," he said. "Some of our more active members will need to be taking a less active role."

The time commitment is about an afternoon a month.

"It's a lot of fun and you have a part in what this organization becomes," he said.

For information on getting more involved, contact Green at 638-0666.