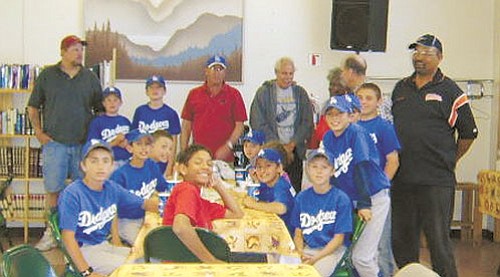 <b>Submitted photo</b><br /><br /><!-- 1upcrlf2 -->The Dodgers celebrate a June 7 victory against Seligman with a pizza and ice cream party hosted by the players’ parents and the Bill Williams Seniors at the Williams Senior Center.

The Williams Diamondbacks took the Williams Little League Championship June 5 after scoring a win over the Williams Dodgers. The win marks the fifth year that the team has won the coveted award. D-Back Kohl Nixon pitched a one-hit shutout game against the Dodgers to wrangle the win. Nixon brought in 18 strikeouts in the game, as well as knocking two home run hits over the fence at Cureton Park. Nixon has five homers for the season to lead the league with one game left to play.

The Diamondbacks and the Yankees will play tomorrow night at 5:30 p.m. to end the regular season of play. All Star players will be announced following the D-Back, Yankees game. Players will be picked for both the nine-10-year-old and 11-12-year-old teams.

The Dodgers took on Ash Fork May 29, taking the win with a final score of Dodgers 7, Ash Fork 4.

A couple of league games were played May 31, including Ash Fork and Seligman. Ash Fork recorded a forfeit in the game over Seligman. The Ash Fork team went on to take on the Williams Dodgers once again, winning the game with a final score of Ash Fork 18, Dodgers 16.

The D-Backs took on the Dodgers in the final regular season game June 5, winning with a final score of D-Backs 4, Dodgers 0. Both teams came into the final game with two losses, leaving the winner of the contest as the league champion. A double header is scheduled for Saturday beginning at 10 a.m. Minor league and T-ball games are expected to continue into the first part of July.