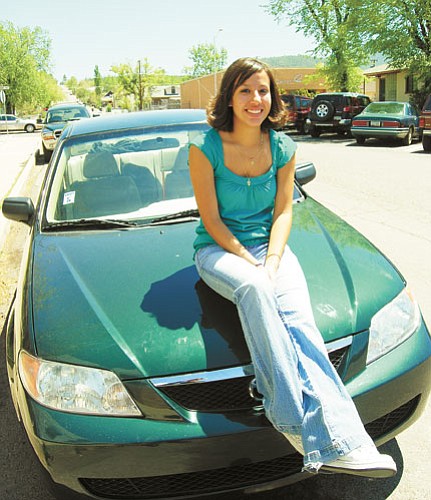 Patrick Whitehurst/WGCN<br> Leticia Aguilar proudly displays her 2002 Mazda. She won the vehicle at the conclusion of the grad night party that followed the graduation ceremony May 23.

A crowd of cheerful teachers, students, parents, family and friends made their way into the Williams High School (WHS) gymnasium May 23 for the 2008 senior graduation ceremony. Fifty-one high schools students graduated from WHS during the annual event. While rain and snow put the damper on plans to hold ceremonies on the Vikings football field, the stormy weather could not dampen the spirits of those students dressed in their caps and gowns.

WHS Principal Steve Hudgens said the ceremony could not have gone better.

"I thought the graduation went really, really well," he said. "There wasn't much of a choice whether it be outside or inside, so that eliminated that discussion of (whether) we could be inside or outside. Since there were cool temperatures, it wasn't too bad in the gym. We had good attendance. The kids were marvelous. Everybody involved in it - you couldn't ask for better support."

Longtime WHS teachers Dan Ayub and Kristi Fredrickson were both honored for their service at the school during the May 23 graduation ceremony. Fredrickson taught math at the high school, while Ayub instructed Spanish and advanced English. Both coached sports at the school as well.

High school seniors also paid tribute to Dulce Davalos during the graduation ceremony. Davalos was killed in an automobile accident on the last day of school, May 27, in 2005. Davalos, who would have turned 18 this year, would have been among this year's graduates. The Davalos family, who has held a memorial service for Dulce every year since her death, held their final memorial service for her this year.

"The seniors wanted to let everybody know that they still remembered her," Hudgens said. "Kids think a lot differently sometimes than adults about what's happened in their lives, the good things and the tragedies; they remember all that stuff and it's important to them to keep that memory going."

Hudgens said the ceremonies are typically quite exciting for both the parents and the students who attend them.

"They go pretty fast, they're pretty exciting," Hudgens said. "It went really, really well. The parents were very proud of their kids. It's a very positive thing to happen to our high school."

The graduation ceremony concluded with the Grad Night event at the Williams Recreation and Aquatic centers, put on by the Parents Who Care group. Hudgens reported a strong turnout for the all-night event.

"There was a lot of people involved, some of the police donated their off time, husbands donated off time, there were people down there cooking and just all kinds of things going on," Hudgens said. "Ninety-five percent of the seniors were in that rec hall all night long. That has some impact on this community. Those are the kind of positive things that we need to have happen in Williams, especially with our youth. When those good things happen, more good things follow and I have a lot of admiration for what those people did."

The all-night event ended with a car raffle at roughly 6 a.m. May 24. WHS senior Leticia Aguilar won the 2002 Mazda, donated by Tim's Autos of Prescott. Mike Herd of Custom Designs Auto Body donated his time and supplies to repair the damage on the hood. Herd was excited when he heard Aguilar won the car.

"Tell her congratulations," he said.

Aguilar herself said she did not expect to win the vehicle.

"I was shocked," she said. "Everyone else around me was clapping and my mouth was hanging open."

Aguilar plans to do some work to the car as well, possibly adding a sound system and tinting the windows. Besides the Mazda, she also won a gift certificate from Diamond Auto Glass during the grad night event.