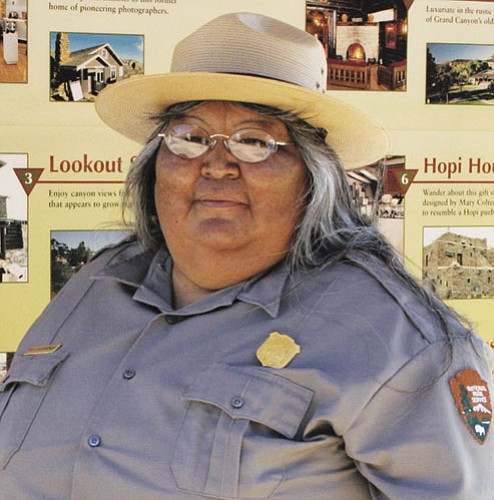 After a lifetime at Grand Canyon and more than 20 years with the National Park Service, Phyllis Kachinhongva is hanging up her ranger hat.

"My parents came here to say goodbye to my grandparents and my grandmother said, 'She's too young to travel. Leave her here and you can come back for her.' But then my grandmother wouldn't let me go," she said.

Apart from one year in Prescott after her graduation and time she's spend at Second Mesa on the Hopi Reservation, she's never lived anyplace else. For the first part of her life, she lived behind Verkamp's but in her teens moved into the upstairs of Hopi House.

For most of her childhood, the Grand Canyon was literally her front yard, which she shared with the Verkamp brood. She recalls how they were always coming up with schemes to make money - selling Kool-Aid at the Bright Angel Trailhead, pottery they'd made and painted themselves and bits of petrified wood that they picked up on the Hopi Reservation.

"We were always coming up with moneymaking ideas," she said.

They also found a fair amount of mischief, routinely giving wrong directions to tourists and at one point sneaking into the flower greenhouse at El Tovar for no better reason than because they could.

"The Mexican man who ran the greenhouse, he caught us and he punished us by making us plant flowers," she said. "It was really kind of fun."

When she was in high school, she worked for Emery Kolb, running the projector for a quarter a show.

"We had scotch tape right there in case the film broke," she said.

She graduated in 1977, in the class that started the tradition of holding their ceremony on the Rim.

"We thought, why do we want to be in a sweaty gym. Let's find a place on the Rim," she said.

That first year, the tossed graduation caps went over the edge, but after that, students paid a deposit and were more careful.

After a year in Prescott, she was injured in a car accident and returned here. She worked for various employers before joining the Park Service in the early 1980s as a fee collector.

Around 1985, former Superintendent Ron Arnberger moved her to interpretation, where she's shared not only from her own Hopi and Apache ancestry but from the culture and history of all of the indigenous peoples of Grand Canyon.

She said that the first thing many visitors ask is "Are you a real Indian?"

"A lot of visitors, especially the foreign people, expect to see feathers. They don't realize how modernized we are," she said.

At the same time, she ties her teaching back to a lineage unbroken from original ancestral groups.

"We want people to realize we are still here. We never left," she said.

While it's not a requirement that Native Americans teach the culture, Kachinhongva said that out of her storytelling tradition, she weaves something of a spell.

"Everyone tells me that when I start to tell my story they imagine me with all my kids around me. When you tell your own story, it's more powerful," she said. "For example for a German to tell the German legend. I'm hoping that eventually they hire more Native American interpreters."

She is retiring after more than 20 years because of health issues. She hopes that her daughter will be able to find a job in the park so that she will be able to stay in her Pinion Park home with her family.