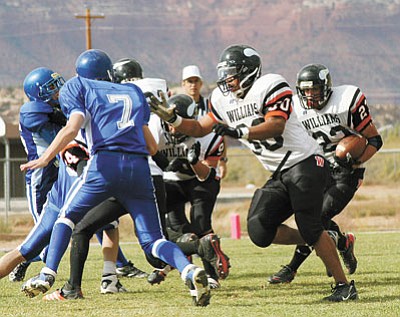 <br>Photo/Shana Brownlee<br> Official practice begins Aug. 4 for the Vikings football team at Williams high School (WHS). Their first game is tentatively scheduled for Aug. 29 or Aug. 30 at the Northern Arizona University Skydome in Flagstaff. A scrimmage may also be held Aug. 22 at WHS.

Schools in Williams are gearing up for the start of the new 2008 school year. For Williams High School students, as well as students at Williams Middle School, that means football. Now is the time for all players in the Williams district to get their sports paperwork in and get those physicals completed, whether students are players in the Falcons team or the Vikings team, coaches said. For players on the Vikings team, practice has already begun for some.

"Kicking off the 2008 Vikings football season, we've started with some volunteer workouts," Echeverria said. "We're also doing a little bit of football stuff here and there. We're kind of limited as to what we can do, but we're just trying to get the kids enthusiastic and in shape and ready to go."

Paperwork must be turned in before players attend the Aug. 4 practice date.

"The hospital was saying they had openings and they wanted the athletes to call and make appointments and come down to get that taken care of," Echeverria said of the physicals that are required.

"I think if the insurance didn't take care of that for them it was $25," he said. "We always get questions about kids getting physicals every year and that's AIA (Arizona Interscholastic Association) guidelines. They need a physical after March 1. If they had a physical after March 1 of this year it's still good for the entire year. If not, they'll need to take another physical this year.

The Vikings are tentatively scheduled to play their first game Aug. 29 or Aug. 30.

Echeverria added that they are also hoping for a scrimmage against San Pasqual.

"We had one scheduled last year and they ended up canceling on us," he said. "That scrimmage would be Aug. 22 if they fulfill that obligation."

The schedule for the Vikings regular season, he said, would remain fairly close to last year's football season.