The working cowboys return
Friday, Saturday and Sunday action on tap for town 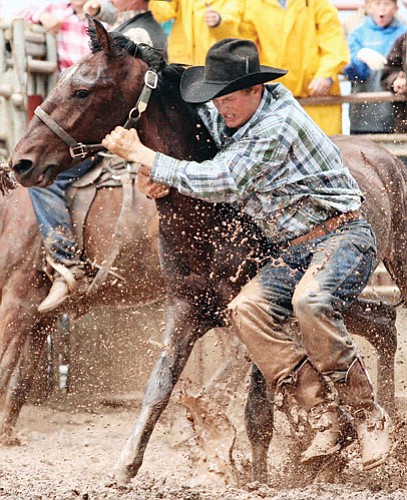 There's nothing like the real thing when it comes to wild rodeo action, many believe, which is one reason why the Cowpuncher's Reunion Rodeo has been an annual hit with fans of the western lifestyle. Participants in the rodeo not only demonstrate their superb skill in the arena, but also use that skill on a daily basis. These guys are the real deal, said Trina Runston, secretary and treasurer of the Arizona Cowpuncher's Reunion Association - real working cowboys and ranch families.

"These are not cowboys that rodeo for a living. These are just cowboys that ranch for a living," Runston said. "You won't see bull riding at this rodeo, because that isn't something cowboys usually do. They ride in their everyday cowboy saddle, not in a rodeo saddle, but what the professional cowboys would be using. The rodeo originally started as a get together reunion for the cowboys and their families once a year."

Rodeo action will get under way Friday and run through Sunday. Shows are scheduled to start at 1 p.m. This year's rodeo marks 30 years of reunion rodeo action in northern Arizona, according to Runston.

"Most of those have been held in Williams. We started out in Flagstaff," she said. "For a few years we went to Flagstaff and then we came back to Williams again. I know at least 20 of the years it's been held in Williams. We have a lot of really great sponsors in Williams that have supported our rodeo for years, like Rod's Steak House. They have been with us every single year. Many of our members are from this area. I think it's pretty well received. We keep the town pretty busy for the weekend anyway," Runston said.

A total of 12 events are planned all together, including wild horse racing, wild cow milking, calf roping, bronc riding, ribbon roping, steer riding for children and team roping events. Team roping events include all girl, 12 and under, 16 and under mix, team tying, century and both ends over 60-years-old.

"Ribbon roping is where the roper has to be a male and he ropes a calf. The runner has to be a female and she has to take the ribbon and has to run to the healer's box," Runston said. "A lot of times on the range the cowboys have to rope the calf themselves, these are dally events, they're not tied off. It kind of originated from that, but we made it kind of fun where the women and little kids could also compete in the event. It's not you're typical professional rodeo. You'll see from little kids to old men out there competing."

In order to compete in the reunion rodeo, Runston said participants have to work on a ranch or be somehow involved in the cattle industry.

"The majority of them are from Arizona, but we also have people coming from Utah, New Mexico and Texas. There are over 500 people competing. We also hold, in conjunction with this, our bronc riding - it's the only event that we let people in that are not part of the association. They're competing for the world champion cowboy bronc rider title; these bronc riders are invited to compete even though they are not members."

Besides the rodeo itself, Runston said vendors, food and a trade show will be offered as well.

"There's also a dummy roping (event) for the kids Saturday morning at 10:30 a.m.," she said. "We also have rodeo slack, which starts at 6:50 a.m. Friday and Saturday. Immediately following the rodeo performances we also run more slack. Those are the performances that do not fit in the performance itself."