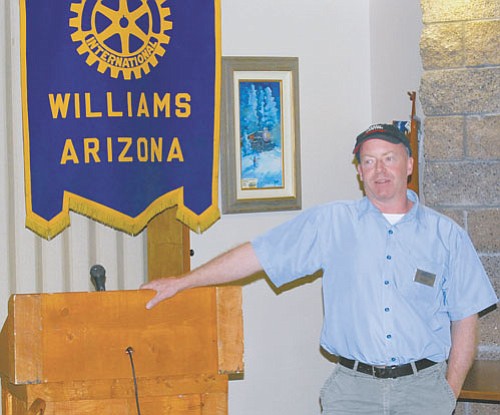 A number of unique challenges lay ahead for Xanterra Parks and Resorts when it comes to moving forward with the company's plan for "going greener," according to Xanterra's environmental coordinator Morgan O'Connor. While Xanterra itself may be notable among companies with a good track record in terms of good environmental practices, that practice is a little more difficult when it comes to the Grand Canyon Railway, where just the nature of the business lends itself to oil, grease and other environmental hurdles.

O'Connor spoke to members of the Williams Rotary Club during their regular meeting July 3.

"The railroad application is a dirty application," O'Connor said. "There's a lot of grease, oil that spews everywhere. There have been great strides prior to me coming aboard to make the steam locomotive and the diesels more efficient, getting more miles per gallon. I'm quite impressed with the ability and the skill there over at the locomotive shop to try to move in that direction."

He said that, as a company, Xanterra is a green corporation, but that greenness doesn't necessarily apply at the locomotive shop, where environmental practices, when it comes to maintaining steam and diesel engines, can be a bit tricky.

"We're about brown over there, so I'm challenged with the task of trying to bring it up some more so that we can meet the standards the company has set before me," O'Connor said, adding that he has begun a number of initiatives to help clean up the shop.

The Grand Canyon Railway, he said, has recently begun a recycling initiative in conjunction with officials from the city of Williams.

"We've been working very close with the city of Flagstaff also with this initiative and have got great support from all of you and I appreciate that help," O'Connor said, adding that much of the recyclable material is composed of cardboard.

"Once this program is in full force I imagine we'll be doing about 3.5 tons a week, in co-mingling, aluminum, plastics, cardboard, etc.," O'Connor said.

Another challenge when it comes to going green is changing the mindset of people not used to environmental considerations.

"It's not unusual, I've run into it before, however, Xanterra has standards that are set very high," O'Connor said. "The big challenges are off Rodeo Road, but progress is being made. Our ultimate goal is to be able to discharge waste, which is primarily water, directly into the sewer. I believe that we can get a permit from ADEQ (Arizona Department of Environmental Quality) to do that. We would save a fortune. Currently we suck out all of our waste weekly, 3,200 to 3,500 gallons at a cost of $2,000 a week. It's a huge expense that I would like to just wipe off the books and just change our practices, so that we can be an industry leader in the short line railroad. Changing mindsets is a very difficult thing."

Other management practices that O'Connor said the company is working include issues with paints and solvents and other materials that railway employees need for regular maintenance on the train.

"We want to try to be VOC free here in the long run. It's an expensive direction to go," O'Connor said. "Thanks to Jeff and the maintenance department, our interior paints are now VOC free product. They were just ordered recently, so they're not off-gassing like regular standard paint does over the lifetime of that."

With the recent purchase of Xanterra by billionaire Phil Anschutz of Colorado, O'Connor said he believes that the environmental conditions will only improve at the railway. Anschutz made arrangements to purchase Xanterra, the Railway included, June 5. The deal may close as early as September.

"I think the Railway will probably be the largest recipient of some good things happening over the next two to five years," O'Connor said.

He said there could be huge changes in the Railway's environmental practices within the next three to five years.

"The potential, when I come here with a fresh set of eyes, is that we have something here that hasn't been tapped to its fullest potential," O'Connor said. "I'm excited that there are other people here that feel the same way."

O'Connor worked as a land manager for developers in Philadelphia prior to moving to Arizona two years ago. Since then he has been working in historic preservation consultation. He said the historic challenge was the toughest part of his job in Philadelphia.

"Most of these parcels had historic characteristics to them, whether they be agriculturally historic or other categories that historic falls under and I struggled to watch large parcels of land become developed and these old parcels of land, literally, had the landscape just completely altered and (the developers) put up these multi-million dollar mansions that would probably start at $1.4 million," O'Connor said. "I decided I would go back to school and focus on environmental planning so that that type of sprawl can be done in a different approach, to where you're not having that much of an impact."