Q + A with the News
Fred ‘Perico’ Avila 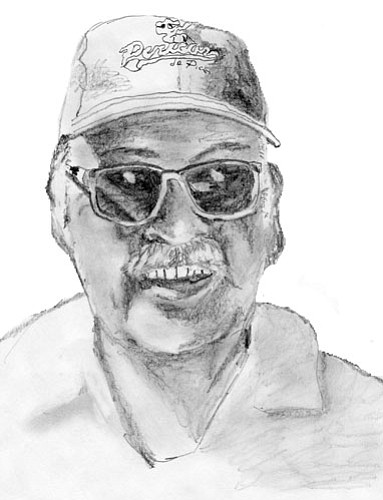 News: What do you do for a living?

News: Tell us about yourself?

Perico: "My house has been there since 1913 that I recall. I was born in the house and I still live there. It's been 74 years. I have always lived here except when I went in the service, Army. I was in the tail end of the Korean deal. Then I came out and went into the theater business when I was younger, right there at the Sultana. I worked for the company for 26 years. That's when I was younger, I started as a marquee janitor and projectionist and then finally became manager. Then I went into the service. When I came back I bought the theater in the early '70s. It went bottom up. Then I went to work for the Forest Service. That's the only way my kids survived or they would have died of starvation."

News: What do you think of Williams compared to other communities?

Perico: "It's a nice town to live in, good clean air. There are not too many old timers left, but we still have some friendly people."

News: How has the town changed?

Perico: "I've seen a lot of changes in this town. It hasn't grown that much really, but there are a lot of people coming here. It's not the same like it used to be. Business-wise, everybody knew you and you had motels and people came in and they gave you a good price, you know, relatives and such, and everybody knew you and was friendly. There were grocery stores, clothing stores - that was different, and everything kind of changed in the '70s. I've been involved with the American Legion for 43 years, that's working with the veterans. I'm a service officer for the American Legion, trying to help veterans get to the VA or if they're sick. Right now I've got two stepsons that came out of Iraq and one needs help. There are a lot of men and women that are coming out and they have stress. They call it post traumatic stress disorder and that's all service connected."

News: What do you think could be of benefit to Williams?

Perico: "If we had more water I think this town would develop more. Another grocery store would help a lot. Motels - we have enough, but some kind of industry to get people to stay here, to work. All of us have to commute to Flagstaff or vice versa. I have been really grateful of all of the people that have given me business here. Even the newcomers, they find out and they call me. I started with 1,000 business cards and I think I still have 700 left. I haven't given many cards out. There are a lot of things that this town could improve, but without the water, I don't think it would develop here with the water situation."

News: What do you do to relax?

Perico: "Paint signs and drink beer, not at the same time."

News: If you could meet any celebrity, who would it be?

Perico: Probably Jerry Lewis maybe, John Wayne and a few that I knew. Being in the theater business, I still watch a lot of the old movies. When I was in the service I got to meet Natalie Wood and Tab Hunter. They filmed the movie, 'The Girl I Left Behind.' I love the old western movies."

News: Where did you last work?

Perico: "With the Kaibab National Forest, as a sign painter in Williams. I retired in 1994."

Perico: "We have four seasons. Summers don't get that hot. Winters aren't too bad and we need the snow for our water supply. Spring and fall are not bad, there are lots of places to go hunting."