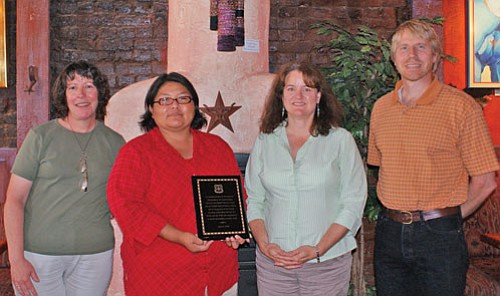 Ona Segundo, the Kaibab Paiute Tribe chairwoman, and members of the Kaibab National Forest leadership team commemorated the renewal of a Memorandum of Understanding (MOU) between the forest and the tribe during a casual ceremony last month at a cafe in Kanab, Utah.

The MOU, which was first signed in 2002, is a formal agreement that clarifies how the Kaibab National Forest and Kaibab Paiute Tribe cooperate with each other on cultural, economic and land management issues.

"The MOU identifies items of interest to both parties and streamlines consultation between entities," explained Mike Lyndon, Kaibab National Forest tribal liaison and archaeologist. "By clarifying how the forest and the tribe will work together, we are able to eliminate unnecessary paperwork and instead focus on priorities identified by the tribe."

As well as providing members of the tribe access to traditional areas of the forest to collect ceremonial and medicinal plants, additional assistance with resource management, economic development and education, the document refines federal guidelines regarding the research, protection and interpretation of prehistoric archaeological sites on the forest.

The Kaibab National Forest and Kaibab Paiute Tribe have collaborated on a number of projects from resource management to environmental education programs for the tribe's youth. In August, the North Kaibab Ranger District will host one such education program, the Kaibab Paiute Kids Campout. Children from the tribe will spend three days and two nights learning about the abundant resources in the forest and the long history of their ancestors on the Kaibab Plateau.

"Working together on these projects has fostered a better understanding and appreciation among our employees of the importance of Kaibab National Forests lands to the Paiute people," said Connie Reid Zweifel, North Kaibab Ranger District archaeologist.

With the renewal of the Kaibab Paiute MOU, Forest Service archaeologists hope to build upon the strong relationship that has developed over the last decade. "The document is symbolic of our commitment to work together," said Lyndon. The memorandum ensures partnership and continued communication between the two agencies