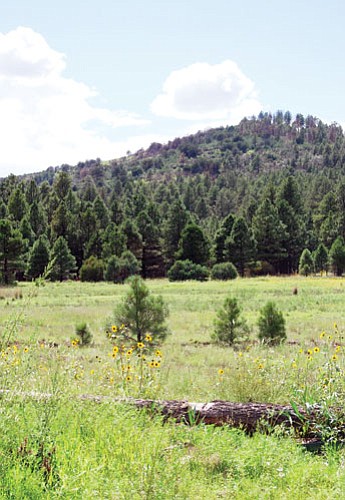 The subdivision, which originally called for a total of 120 lots, was scaled back to 70 lots. The properties in the subdivision were reduced to allow for larger land parcels with a 15,000-square-foot lot size. Some parcels could go as high as one acre.

"We've already had it approved for preliminary plat, as well as a rezone," Holmes told council members during their July 10 meeting. "It's been rezoned to ER, estate-residential designation, 15,000-square-foot minimum. The previous zoning there was R-17 throughout the majority of it, with some AR, or agricultural-residential, at the south end."

The parcel of land itself, owned by members of the TMD Group, has been a part of several hearings within the last year and a half.

"Finally a roadblock was cleared when it was suggested that the developers acquire access to Route 66, which they had to get from the Pouquette family who owned the property," Holmes said. "Today I learned that they have a signed preliminary agreement."

The Route 66 access would be dedicated to the city of Williams as a primary access right-of-way, Holmes added. Officials with the TMD Group, meanwhile, had said they would not pull a building permit until they had an agreement with the property owners for access.

"The other remaining issue in this project is the secondary access. The exact location of it, the exact configuration of it," Holmes said during the recent council meeting. "That would be the access that connects from 10th Street and Park Way, whether it's going to have a square configuration, which means property could be potentially developed, which is owned by the city, or whether it has more of a curvilinear configuration. I think that council, at the preliminary plat stage, preferred the square arrangement."

Other questions remain about the access road as well, in particular, whether it should be used full time or only part time.

One homeowner attended the council meeting to request that the access road be curved in order to avoid future home building near her home. While they did not specify the alignment during the recent meeting, council members did, however, approve the squared alignment during the subdivision's preliminary plat approval. Council member Don Dent said the squared roadway would allow for future growth in the area that could ultimately benefit the city.

While council members approved the final plat, they did set a number of conditions for officials with the TMD Group. Conditions for approval included a signed purchase agreement for the proposed right-of-way and that the right-of-way must be dedicated to the city of Williams upon completion. Council members also asked that the access road from 10th Street to Parkway be used for emergency access only and be equipped with a crash gate. The developer must also agree to contribute $5,000 per lot to water storage tank capacity in excess of the amount needed for FCE, according to city officials.