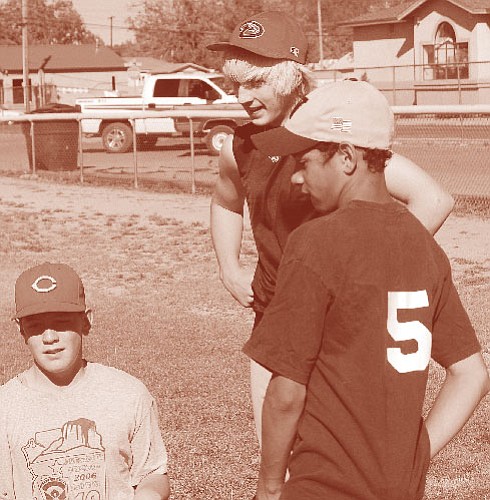 <br>Patrick Whitehurst/WGCN<br> All Stars on the 11-12-year-old Williams team during a recent practice at Cureton Park.

The Williams 11 and 12-year-old All Stars got into the swing of things recently as they played a couple of tournament games. The Williams team played their first tournament game against Prescott Valley July 1. Williams took the win in the game with a final score of Williams 8, Prescott Valley 4. All Star Kohl Nixon pitched for Williams in the game. He was relieved in the sixth inning by Garret Pettit. Nixon, Coty Baxter, Cody Dick and Ethan Berry went 2 for 3 at the plate. Berry hit one out of the park for a home run in the game.

The All Stars from Williams went on to play a game against the Chino Valley All Star team July 2. Williams couldn't get their bats swinging in the game and battled against a number of pitchers. Williams took a loss for their second tourney game, ending the day with a final score of Chino Valley 6. Williams 0. Cody Dick and Garret Pettit pitched for Williams in the game.

Williams All Star Colton Grantham was 3 for 3 at the plate in the game, while Nixon and Edgar Duran were both 2 for 3. Williams was up 6-0 in the third inning of play, as players on the Wickenburg team loaded the bases with no outs. Williams All Star Coty Baxter is credited with stopping the rally, however, when he struck out three batters in a row. Wickenburg managed three runs in the fourth, with bases loaded and one out. Again, Williams pitcher Joaquin Salaz shut down the Wickenburg team. Kohl Nixon followed suit to end the game with three strikeouts out of four.