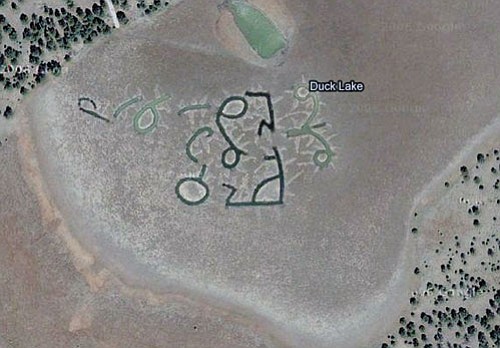 <br>Photo/Google Earth<br> The geoglyphs of Duck Lake, seen from the air, were created by Forest Service employees in the 1980s.

Are Kaibab National Forest managers communicating with intelligent life from out of this world? Or perhaps, they discovered evidence of a long-lost culture native to northern Arizona?

Rumors have been running rampant regarding geoglyphs on the KNF's Williams Ranger District. Geoglyphs are drawings or designs on the ground. They can be created by either building up or removing stones, gravel or other earthen materials. Famous geoglyphs include the Nazca Lines in Peru and the Marree Man in South Australia.

"As the use of Google Earth has increased in recent years, so has the speculation about aliens and ancient civilizations," said Neil Weintraub, an archaeologist on the KNF.

"It is true that the Williams Ranger District is home to some very large, innovative designs that are clearly visible using Google Earth or other similar programs and sites."

But those designs, despite the hypotheses suggested by some imaginative minds, were actually created by former Forest Service employees. While little is known about most geoglyphs - for example, their meaning or cultural significance - much more is known about the Kaibab National Forest geoglyphs.

In the late 1980s, two Forest Service employees were given the task of improving the seasonal wetland of Duck Lake, which is located on the Williams Ranger District just north of the popular Keyhole Sink archaeological site. The employees decided to have a little fun while developing additional areas for water to pool. The result is some creative designs that are indistinguishable from the ground but quite lovely from the air.

"While people may be disappointed to learn that the Kaibab geoglyphs were actually made by Forest Service employees, there are plenty of other examples of ancient geoglyphs in the Southwest," Weintraub said.

For example, the Blythe Intaglios, which are located near Blythe, Calif., are believed to be between 450 and 2,000 years old. There are six different figures in three locations.

"The Kaibab National Forest, however, is not home to any of the ancient geoglyphs," Weintraub added.

For more information on the Kaibab National Forest geoglyphs, contact Weintraub at (928) 635-5647.