Happy Fourth of July, Williams
Small town festivities sure to offer fun for everyone in Williams 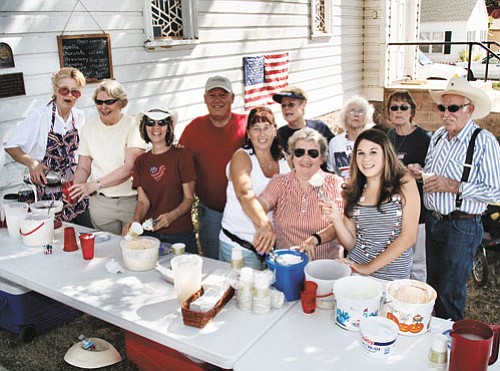 A number of great events are on tap for this weekend's Fourth of July celebration in Williams. Things will get rolling with the beloved Fourth of July parade through the downtown area beginning at 6 p.m. Some of the highlights for this year's parade include the 40-piece 108th Army marching band from the Phoenix area. Children in the summer SOAR program will also be a part of this year's parade as they ride with the Kaibab National Forest entry.

The Arizona Skyhawk Skyjumpers will begin the festivities as they parachute into downtown at the start of the parade. Other parade entries include tractors with the Northern Arizona Antique Tractor and Engine Association, vintage cars from the Route 66 Car Club, and youth from the Williams Recreation Center among others. The Flagstaff Marine Corps League Color Guard will also be present for this year's parade to march for their second consecutive year. The group of retired Marines will also march in the Flagstaff parade at 9 a.m. the same day.

According to Williams-Grand Canyon Chamber of Commerce Events Coordinator Sue Atkinson, the theme for this year's parade is "Faces of Freedom." Volunteers in the parade will dress up as a number of past presidents, including Abraham Lincoln, Teddy Roosevelt and other patriotic characters. The colorful costumed characters will be the grand marshals for the parade as well, according to Atkinson.

Two announcer stands will be available for this year's Fourth of July parade in Williams. The first will be along the parade route outside of Old Smoky's

Restaurant near Seventh Street. The second will be located along the route near First Street, according to organizers. The parade is sponsored by the Grand Canyon Railway. Pepsi and the City of Williams are also sponsoring this year's parade.

Merchants in the downtown area will also be offering sidewalk sales throughout the Fourth of July holiday, according to event planners. Besides the sales, businesses downtown that "dress up" their business for Independence Day will also be eligible for a special Chamber contest. Winners of the contest could receive recognition in the Williams-Grand Canyon News, a $25 certifi-check gift certificate and a winner's sign that can be hung in the window of their business.

The beloved ice cream social, an annual event in Williams for the Fourth of July will take place Friday from 3-4 p.m. at the Community United Methodist Church and will include chili dogs as well. Members of the Williams Rotary Club will also hold a barbecue Friday from 3-6 p.m. in the parking lot between the Williams Forest Service Visitor Center and the Williams Recreation Center. A number of activities, including games, will be available for the public, including carnival games, pony rides and a dunk tank. The Williams Aquatic Center will also offer a free swim from 1-4 p.m. as part of the Independence Day festivities. A fundraiser will also be held July 4-6, beginning at 11 a.m., for Williams resident Ellie Krombeen. The event will help pay for Krombeen's participation in the Miss Teen USA competition to be held later this year.

Prayer for the Troops

The seventh annual 4th of July Prayer for the Troops at Monument Park will begin at 4 p.m. Guests speakers for the event will include Mayor John Moore, Pastor Tim Milner from Family Harvest Church, Williams Judge Bill Sutton Jr., American Legion Cordova Post #13 and Fred and Gloria Avila. Music for the event will begin at 3:30 p.m. provided by Family Harvest, Anna Torres and Barry Davis.

Big fun planned for the Fourth
Editorial: There can never be too many local events
Editorial: Fourth of July - it's not all about the fireworks
Williams Independence Day parade kicks off at 4 p.m. July 4
Williams Fourth of July festivities an all day affair
Event Calendar