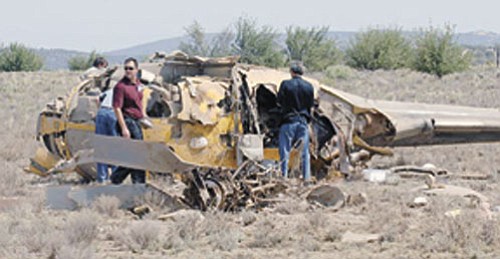 While National Transportation Safety Board (NTSB) officials sift through the debris left by the deadly collision of two medical helicopters over Flagstaff that left six dead and one in critical condition, investigators are also in the process of investigating the earlier crash of a single medical helicopter June 27 outside of Ash Fork. Three individuals were injured in the Ash Fork crash, which occurred near Highway 89 north of Paulden near the Drake overpass. The Air-Evac helicopter was based out of the Prescott Airport. Both the flight nurse and the flight medic from the Ash Fork crash are listed in serious condition. The pilot is listed in good condition.

The helicopter was en route to transport a patient, Michael Collins of Ash Fork, who was involved in a motorcycle crash, according to reports. Collins was eventually transported by other means to the Flagstaff Medical Center where he was listed in good condition.

Ash Fork Volunteer Fire Chief Lewis Hume said the Ash Fork department responded to the crash after a call went out for assistance from the Juniper Wood Fire Department.

"They were responding to another medical emergency call. We came out after the helicopter went down and gave medical treatment to the folks," Hume said. "We just pretty much dealt with the three patients. That helicopter rolled over. It didn't come in easy. I'd say it was a total loss. But it didn't burst into flames or anything."

NTSB officials are currently investigating the site to determine the cause of the crash.

"We're just in the business of helping folks. That's our kind people that are helping other folks. They come in here and help us all the time and we just want to be able to return the effort," Hume said.

"The chopper kicked up a lot of dust and dirt. It's called a brownout. We just saw it go down and Juniper Woods Fire came to the aid and tried to get everyone packaged up and ready to go," he said. "Air-Evac crews works very hard for us and we were glad to be there for them. These were our brothers in the EMS field so it's very hard for us now. The pilot did everything he could for them."

Besides Juniper Wood and Ash Fork, fire officials with the Kaibab Estates West Fire Department also responded to the scene.

"The three departments, under the mutual aid agreements, worked very, very hard. I would like to say thank you to all the fire departments who worked through the night and the next day to take care of this emergency," Davenport said. "It was awesome to see three departments working together as one. We wish the pilot, the nurse and the paramedic our best."

The Ash Fork and Flagstaff crashes, combined, brought the total of medical helicopter crashes to nine for 2008, according to information from the NTSB.