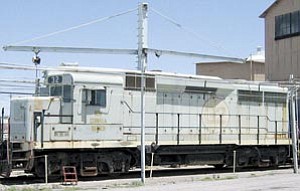 Al Richmond, chairman and CEO of the Arizona State Railroad Museum, may be in for a good year when it comes to his long-awaited railroad project in Williams. Thanks to a donation from the Salt River Material Group (SRMG), museum supporters are celebrating the acquisition of a 1954 40-ton GE switch engine from SRMG's Clarkdale cement plant. According to Richmond, the engine moved all of the cement products for the Glen Canyon Dam between 1958 and 1959. He added that very few of the engines exist today.

"There are different pieces of equipment that are available now that are more efficient," Richmond said, adding that there were a few qualifications that made the train worthy of inclusion in the railroad museum.

"One is the type of engine it is and what it has done," he said.

SRMG also hopes to be involved in the creation of the engine's interpretive exhibit when it finally goes on display at the museum.

"The interpretive displays tell you what it is, what it did and some of the specifications on the engine. It's a basic history on the locomotive," Richmond said.

Two Ajo locomotives will soon be a part of the ASRM as well, according to Richmond, thanks to a donation by the Freeport-McMoran Copper and Gold Company, formerly known as Phelps Dodge. The two engines, a 1947 NW2 switch engine and a 1953 GP-30 road switcher, were used exclusively by the company at their Ajo copper mines, Richmond said.

"The switch engine is typically used in the yard," Richmond said. "The larger one would have been used to haul materials back and forth to the main line. There was about 45 miles of track."

Richmond said he was thankful to both SRMG and Freeport-McMoran for their donation and that the project would not be possible without such indispensable help.

Richmond said the new acquisitions would become an important part of the planned museum.

A number of plans are in store for the proposed museum, which will offer interactive exhibits for a more hands-on experience to museum visitors. Another recent addition to the railroad museum is a mockup light rail vehicle, acquired last year through the city of Phoenix and valued at a cost of over $350,000. Other plans include seeking funds through the Greater Arizona Development Authority (GADA). Some of those funds, according to Richmond, may be used to hire a "fundraising employee" who would seek money for the museum from a number of different sources.