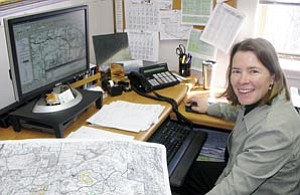 Assistant Forest Planner Ariel Leonard puts the finishing touches to the maps that will be used in the proposed action plan, scheduled for release in mid-February.

The Travel Management Rule (TMR) is alive and well on the Kaibab National Forest, despite a late arrival for the Forest Service's (FS) proposed action plan, originally scheduled for completion last year. According to officials with the Kaibab National Forest, the proposed action plan, step two of the TMR, will be released in mid-February. The plan was originally scheduled for release in October, though that date has been shifted due to the creation of a comprehensive list that explains what forest roads are slated for closure and for what reasons, FS officials said. That comprehensive list, they said, came as a result of the public's desire to know exactly why certain roads were being closed.

TMR is a Forest Service campaign aimed at addressing areas of the nation's national forests damaged by vehicle use and abuse. A number of meetings were held in the Williams area throughout 2007, including town halls and work sessions, designed to help the public understand the rule. Results from those meetings, where public input helped FS officials determine what roads should remain open and what roads should be closed, led to the proposed action plan. Jackie Denk, public information with the Kaibab National Forest, said additional work sessions would be held once the proposed action plan is released. Meetings for the public to make their comments heard, she said, are tentatively scheduled for some time in March.

"Where we are with the proposed action is that we plan to have it to our regional office by the end of the month. What they do is review it and then they send it back to us. Usually that takes a couple of weeks. At the point that we get it back we will immediately issue it publicly. That's putting us into mid-February," Denk said, adding that the plan would be mailed to interested parties prior to setting a date for work sessions in order to give the public time to review the document.

"My understanding is that the task force will want to hold another town hall-style meeting," Denk said. "And then we'll hold work sessions again at the district office. That will obviously include a close review of the maps and everything that goes along with it. One of the things the public asked us to do was to provide sort of a spread sheet of any roads that we decide to close for some reason, that we list very specifically what that reason is, the rationale, for that closure."

Williams District Ranger Martie Schramm said the plan might undergo a change or two as well, via requests from the regional office, prior to the proposed action being made public.

"When we get it back, we may have instructions to clean up something, so I'm not sure if it would be immediately (issued), hopefully within a week of receiving it back from the regional office, we'll have it," Schramm said. "It is a lot of roads, but we've had several internal meetings where the archaeologists, biologists, all the specialists, have gotten together and they've literally

gone road by road. For those roads that we don't think there's a need for them anymore, we have come up with a specific reason as to why we want to close them. That's part of the reason why the proposed action hasn't come out sooner than we thought it was going to.

"If we have an area where there are sensitive soils, so to speak, where it wouldn't take much for two or three or four ATVs or big trucks to go down those roads, then we find that the soils just aren't functioning the way they should be - that would be a reason to close. If there's a road that leads the public into a nesting area for sensitive wild life species or fawning area, that would be another reason for closing roads. A big thing that I ask folks to take a look at are roads that I consider parallel routes, where the Forest Service has a designated road and then all of a sudden there's a user created road, that would be a reason to not keep that open."