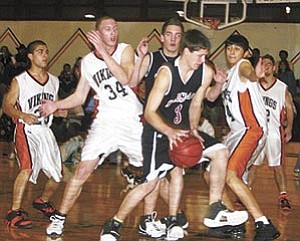 The Williams High School Vikings had a good week, thanks to a couple of strong wins against Ash Fork and Seligman. The Vikes played games at Ash Fork Jan. 15, followed by a home game Jan. 18 against Seligman. Whether they were away or at home, however, the Vikings were able to come out on top.

In their Jan. 15 game in Ash Fork, the Vikes started out with a commanding lead, forecasting what would become a familiar theme in the first half of play. The Vikes ended the first quarter up seven, with a score of Williams 8, Ash Fork 1. It was Williams 25, Ash Fork 6 at half time.

"The Ash Fork game started off well for us as we were able to build an early lead in the first half. The third quarter, however, saw the Spartans keep pace with us offensively. Fortunately, we had a solid fourth quarter to ensure the victory," said Coach Denis Kirkley.

He said the second half of the Ash Fork match showed that the Vikes need to work on their "man-to-man" and "zone" defense.

"That has been a major emphasis for us this past week." Kirkley said. "Teams will have hot nights and off nights when it comes to shooting, but there is no reason to play poorly on the defensive end unless you just get lazy. We have got to continue to work on our defense."

The Vikes opened up their house to Seligman Jan. 18 to play a much closer game, point-wise, than their earlier match up against Ash Fork. A good crowd of fans turned out for the Friday night WHS home game.

The Vikes began the first quarter by scoring 16 points compared to Seligman's 11. They kept up the pressure into the second quarter of the game as well, scoring an additional 18 points. Seligman scored 16 points in the second, ending the first two quarters with a score of Williams 34, Seligman 27.

The third quarter didn't go well for Seligman, who only scored one point in the entire quarter of basketball. The Vikings, meanwhile, scored 17 points. It was Williams who slowed in the fourth, however, dropping to a total of seven points in the fourth as compared to Seligman, with a fresh blast of energy, who scored 13 points before the final horn. Final score for the game showed Williams victorious with a final score of Vikings 58, Seligman 41.

Top Viking players in the Jan. 18 game included No. 34 Enzo Clapper with a whopping 21 points, one block and 18 rebounds. No. 24 Guy Forbis had a good night as well with 18 points, one steal, two assists and two rebounds. No. 52 Adam Schulte scored five points in the game with two rebounds, followed by No. 42 Adam Valdez with four points, one assist and six rebounds.

"Both teams played a good first half. We were able to hit a few threes to garner a seven-point lead after the second quarter. We made some adjustments during the halftime and had our defense improved in the third quarter. This enabled us to get all of our players good minutes in the game," Kirkley said.