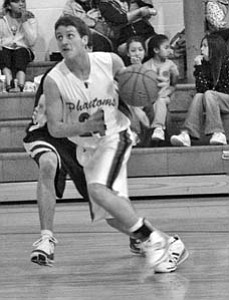 The short-handed varsity Phantoms are battling for a favorable seed in next month's 1A regional basketball tournament in Fredonia, with a 48-24 win over the Spartans in Ash Fork last Friday night.

Junior guard Danny Trenchard led all scorers with 18 points, followed by Bille Booth, who scored 14 points before he suffered a severe foot sprain early in the third quarter.

The Phantoms opened the first quarter by holding the Spartans scoreless, leading 15-0 and that was essentially the game.

The Canyon travels to Fredonia next Saturday then finishes conference play on Friday night at home against the same Spartans. If they can win those two games they would go to regionals as the number two seed behind Williams.

Head coach Dan Lopez said it is nice to have control over his team's own destiny instead of hoping someone beats someone else.

"This group of kids have really battled all year, and now we have to step up again as we are losing two kids because of academic problems," he said. "We are already short-handed and when you take away two players who have been contributing, it really hurts what we can do or not do on the basketball court. Foul trouble or an injury really leaves us with few or no options."

The core of the team - Trenchard, Cruz Caballero, John Kissner, Booth, Dan Celis and Andres Velazquez - have been solid all season.

"More importantly they get things done in the classroom," Lopez said.

On Thursday night, the Phantoms played Northland Prep from Flagstaff, defeating the Trojans with a final score of 53-32.

Booth led all scorers with 20 first half points and 12 rebounds. Trenchard had 11 points and Celis chipped in 8.

The Phantoms led 35-22 at half time and coaches Lopez and Greg Walker made some defensive adjustments that shut down Prep's leading scorer A. Rudebusch, who had 16 of the Trojans' 22 first half points. Rudebusch finished the game with 18.

The varsity boys lost a non-conference 1A North game against the Joseph City Wildcats Saturday night, 52-30.

The already short-handed Phantoms were playing without leading scorer Booth who was in a walking cast with a severely sprained foot.

The Canyon hung tough for the first half of the game, trailing 17-22 at the end of the second quarter. Trenchard stepped up and carried the young Phantoms as long as he could, scoring a game-high 18 points, 5 assists and 4 steals.

The outmanned Canyon was outscored 30-15 in the second half by the taller and deeper Wildcats.

"I thought we battled pretty well considering that we lost 21 points per game out of our lineup," Lopez said. "Danny (Trenchard) played a tremendous game in every area, as we had to have him score, rebound and defend without any rest. He was a warrior out there tonight. We just are not deep enough to overcome losing all the production Bille (Booth) gives us, and Joe City is a good team and they played well," an upbeat Lopez said.

The Canyon goes on the road next weekend then finishes the regular season with home games Friday, Feb. 1, and Saturday, Feb. 2, against Ash Fork and Mogollon.