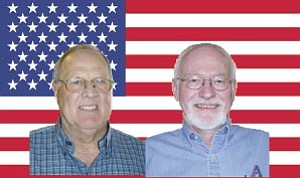 William "Bill" Miller, a candidate for Williams City Council, has lived in Williams for over five years.

Miller, along with his wife Sierra, operates Williams Realty along Route 66. Miller is both the broker and the owner of the business. He said he is an independent, as it depends on who there is to choose from during any given election.

Miller, an ex-law enforcement official for the sheriff's office, was part of O.J Simpson's surrender in Orange County. He holds a bachelor's degree in criminology and an associate degree in police science and is a graduate of the FBI National Academy.

He said he decided to run for the city council seat for a number of reasons.

"One reason was that there were some issues that I had with the city that I would like to see addressed in a different way, nothing really specific. On the whole I have agreed with everything the city council is doing. I think they're doing a good job. It's just the way some things are done and I'd like to be more of a part of that. Rather than be part of a problem, I'd rather be part of a solution," Miller said.

If elected, he said he would like to see more information provided to the public in regards to what the city is doing.

"I would certainly like to see the projects the councilhas started to be continued and brought to some completion. I would like to see more information provided to citizens in a better way of keeping them informed and answering their questions. I'd like to see a stronger focus on drug and alcohol abuse and underage drinking, I'd like to see continued development of our fire, police and emergency medical care, continue to develop the work to develop and maintain sufficient water supplies, continue to repair and maintaining existing city streets, control residential growth and commercial development, develop a broader tax base to fund city needs (and) investigate incentives for new business and industry, re-evaluate impact fees for new construction, develop additional incentives for green building, impartial and ethical conduct in conducting city business, continued support of our great city workers, improve communication between the city and the residents and become the greatest little city in the southwest," Miller said.

He added that he would also like to see the city put more of an emphasis on private property upkeep and weed abatement.

Miller said that he believes the current city council has performed adequately, though he does have a few concerns.

"I think the current city council is doing a fairly good job. My concern is, not so much what they do, as how they do it," Miller said. "I think more communication with the residents, so that they thoroughly understand decisions made by the council and understand the reasoning for it, would eliminate a lot of the unknowns."

He said that growth in Williams is inevitable.

"It's controlling it in a way that enhances our city and provides the financial support to help us provide city services that are essential. Right now we have a lot of custom home lots on the market with very little building going on and I'd like to see us develop those lots and build some homes and get that tax base that we need before we start accepting more new development. I'd also like to see us work on developing the industrial property the city has access to, to encourage non-polluting type industries to come into the area," Miller said, adding that schools are an essential part of a community's growth.

"I think the biggest issue right now is our schools, trying to develop a program and financing to support a good school system, because that's essential to our community growth, to the quality of growth that we want. The other issue is trying to develop a broad tax base to help support and finance the programs we really need like our streets and our sewer system and our water supplies. We have to try and attract commercial development that's going to be compatible with the country we live in and with the needs of the city," Miller said.

If he could accomplish one thing while in office, Miller said what he would like to see is prevention and awareness in regards to alcohol abuse and underage drinking.

"I think one of the biggest issues our community faces is a social issue, that's going to impact the quality of our life, and that's alcohol abuse and underage drinking. We've already seen that impact our lives this past year. I'd like to see us work on preventing that from occurring again. That would probably be one of the biggest things. That and controlling the growth in the city," Miller said.

"I had the experience, a number of years ago, of running for a school board and I've always not admired people who have an MD degree and then use it outside of their profession to gain things like license plates that are special, allowing you to park in places where ordinary citizens don't, and then abusing that right, so I didn't use my MD on the ballot for the school board and a lot of people didn't have an idea who I was by the name. As it stands now, people know me pretty much as Dr. Jim Wurgler, that kind of covers it. (Doc) is kind of my common nickname in the community," Wurgler said.

Wurgler has been married for almost 50 years and has five children and 15 grandchildren. He is a retired physician and considers himself a moderate independent, though he said he is currently registered as a democrat. Wurgler was appointed to his current seat on the council roughly one year ago.

"I was appointed to this position about a year ago when Pat Carpenter moved out of town and that made him ineligible to continue on the council, then they entertained people who were interested in the position, so I was appointed to that position," Wurgler said, adding that he became really involved in community affairs after he retired.

"I had a lot more time to do stuff involved in community affairs, so I was involved from the beginning, almost, with the chamber of commerce and the Williams Clean and Beautiful Committee and I'm on the Board of Director's for the Guidance Center. I'm on the board of directors for the Northern Arizona Regional Behavioral Health Authority, better known as NARBHA. I'm the chairman of the board of directors of the Grand Canyon Association, which is the non-profit cooperating association at the Grand Canyon that operates the books stores and that sort of thing and supports the park with funds that don't get sent by Congress.

"I learned so much about how to make things work and how involved a person needs to be in a lot of different areas in the community in order to be a well informed city council person and the ability to represent a broad spectrum of people in the community that I think I can be of value to people in the community and appreciate the opportunity to get to do things. I can't be a doctor anymore because I'm retired, so now I can be a do-gooder. Maybe that's the reason I'm doing this. I'm a do-gooder at heart," Wurgler said.

Wurgler is also involved with the Williams Alliance, the Williams Needs an Angel Committee, the Greater Williams Community Fund, Salvation Army and many others. He is also on the Main Street Board of Directors and is president of the local chapter of the National Railway Historical Society.

He said one of his greatest accomplishments would be his involvement in the community's economic development process.

"We're struggling trying to get things done, but it looks like we are going to, probably within the next several months, actually get a road built across the land just north of Interstate 40, what they call the Frontage Road, that will connect Grand Canyon Boulevard with Airport Road. I'm satisfied that getting that in is really going to open up opportunities for a variety of businesses to come in (and) provide decent employment," Wurgler said.

He said he has a number of plans if re-elected and believes the city council has done a good job conducting city affairs.

"One of them is to make sure that we get the water situation squared away," Wurgler said. "I'm basically trying to do the things that are needed to see that everybody in the city benefits from the actions of the council and that we do our best for the city of Williams. I think city council is a conscientious, hard working group of people who are trying to do the best that they can for Williams. I'm not aware of any significant agendas that would be of a personal nature. There's always going to be a little bit of that. I kind of take pride in the fact that I don't have any axes to grind. I'm retired. I don't have any investments that are involved in any community business, so I feel comfortable that I can look at things from a pretty neutral perspective and not have to be concerned about personal issues."

Wurgler said he would like to see growth in Williams that is controlled.

"We're not looking for big factories or anything that would be polluting, or a whole host of different things, but something that would offer better salaries, better revenue flow, would be compatible with our environment, that's the area I would like to see us going in growth. I've said this in another venue; the most important thing to me, if it were possible, if I could say five years from now what I would like to see in Williams, it would be for us to be able to make our schools magnet schools. I know that's asking a lot, but I think that would do the most toward the long term future of Williams as a great place to live, as a great place to work, as a community that has a lot of pride in itself and works well."

Wurgler named water as one of the biggest issues facing Williams.

"I'm sure everybody agrees. The second one to me is that we get Frontage Road built connecting Grand Canyon Boulevard and Airport Road, because that would then ultimately bring in additional revenue for recreational facilities, additional things for the youth of the community," Wurgler said.

If he could accomplish one thing in office, Wurgler said he would like to see the water issue resolved. He said he thought better communication between Williams and Flagstaff would be a good thing as well.

"When I was still actively practicing I was involved in the Arizona Academy of Family Practice and one of the things that I think is helpful is that, as I get more familiar with a variety of people and different walks of life (like being involved with Flagstaff people and people in the business community over there and people in the medical and other venues there) it ultimately is to Williams' benefit to have people outside of Williams view our community positively and not negatively. We've had way more than we need of negative publicity," Wurgler said.