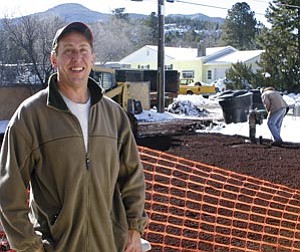 Foundation for Senior Living Manager Guy Mikkelsen stands in front of the new food bank site. Construction is expected to be complete by Easter.

It's beginning to look like an awesome year for the Williams Food Bank, as work continues on the volunteer organization's new building, to be located directly behind their existing location at 200 S. Ninth St., shared in conjunction with the St. Agnes Apartments. The new digs, according Guy Mikkelsen, manager for the Foundation for Senior Living, will be used solely for the Williams Food Bank.

"In 2008 we plan on growing, as far as having the new building in the back here. It's going to be dedicated space for the food bank rather than sharing the space with the seniors that live here at St. Agnes. That will give me a little more room to organize and move around and to better serve the clients," Mikkelsen said.

Work on the new building began shortly after Thanksgiving and crews with Reyes Construction are nearly ready to pour the concrete foundation. The new 30 foot by 30 foot building is estimated to open by Easter. Mikkelsen said a grand opening would be held to celebrate the new building as well.

"We'll probably host a chamber mixer," Mikkelsen said. "The work isn't donated, but the building actually is. We have someone that wanted to remain anonymous, but did offer to build this building for us. I feel it was heaven-sent. The one thing we needed was a little bit more space. This is going to make it a lot easier for us and a lot better for the clients. We're planning to have a walk-in cooler, so we'll have more cooler space. It's just going to be a front room and a back room. The front room will be where we pass the food out, have shelving and it will look, probably, like a mini-grocery store."

He said the back room would be used for storage and for the walk-in cooler and loading.

"That's our big exciting thing for the year - to get this building going by Easter. Who knows what will happen after that? I'm actually writing a couple grants right now to see about funding for filling it with new shelving, trying to get some better accessories. The stuff we've been using has been great, but they were kind of store hand-me-downs from the different grocery stores that help us out. I haven't secured those grants yet, but I am going to write the Greater Williams Community Fund."

Mikkelsen said the Williams Food Bank worked hard in 2007 to secure new sources of food for the organization's growing demand. Over 4,000 food boxes were handed out in 2007, he said, which comes out to roughly 11 boxes of food a day. Much of their food, Mikkelsen said, comes from local charity.

"2007 was a great year for the food bank. We had great local support, but we did a lot of organizing, too. We've been able to secure food sources outside of the Williams area, to the tune of about 130,000 to 150,000 pounds for the year." Mikkelsen said, though he said exact number were hard to gauge.

"We don't have exact numbers. Things like the school drive, we don't get exact weights on how much food, so we have to estimate, but we did have the food bank 45 weeks out of 52 Fridays. Actually there were 42 Fridays and three special food banks, Easter, Christmas and Thanksgiving. We served 120 families for Easter, 160 families for Thanksgiving and 150 families for Christmas. They all got a lot of extras, special stuff."

He said the group has also expanded to help out in other areas when they can as well.

"We have been able to get other types of things now, like this year we were able to donate a wheelchair to someone who needed one. We got them a new wheelchair. Purina has given us a couple of donations and we're building a relationship with them. Coca-Cola is a regular supporter now. They gave us product five or six times last year. We were busy with a lot of local activities, the school drive was a big success (and) we had two quilt raffles, two homemade quilts. We raffled one at Mother's Day and one at Christmas. Those were very successful. Of course we had the scooter raffle, which was a big fundraiser for us. In the summertime we had a booth at the Rumble on 66, which went very well. The scouts did a food drive for us, the post office did a food drive for us."

Local support, he said, comes from a variety of locations, from businesses like Pine Country Restaurant, Pancho McGillicuddy's and Doc Holliday's Steakhouse, each of which donated turkeys at Thanksgiving.

"We did have a lot of great support, I just can't say enough, from the local community, the restaurants and individuals both came out when we needed them to, to help with turkeys, from all the restaurants at Thanksgiving. We couldn't have done it without that," Mikkelsen said.