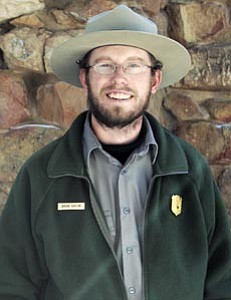 Brian Gatlin was chosen as the park’s Interpreter of the Year. Recipients are selected by their peers.

Citing his willingness to mentor and his passion to teach, fellow rangers selected Brian Gatlin as the park's Interpreter of the Year.

"This was a ranger I wanted to be like," said one colleague, while another added, "I could do no wrong modeling myself in his image." He was also described as "the consummate teammate" and "a skilled interpretive practitioner."

Gatlin, who is stationed out at Desert View, has about five years with the Park Service, all here at Grand Canyon. It took numerous applications as he worked at less-than-satisfying warehouse and mail room jobs in Boulder, Colo.

"Grand Canyon in particular was a place I really wanted to be," he said. "I kept putting out applications whenever I saw an opening."

He saw the job of ranger as "one of the best possibilities out there for me in terms of my interests and combining what I wanted to do with where I wanted to be."

He holds a bachelors degree in philosophy from the University of Colorado at Boulder, where he also did a fair amount of archaeology coursework focusing on the southwest. That was the specialty he brought to the job.

"Everyone comes here with their own strength or compartment of knowledge," said Gatlin. "I knew a lot about the human history and the archaeology before I got here. Once you get here, you fill in the gaps and learn more whether it's geology or California condors."

He sees his role as being here for the visitor, whether that means giving prepared ranger talks or roving along the rim answering questions.

He most enjoys those that drive him to research more. For example, in a conversation with visitors about Native American languages, he was intrigued to learn that in addition to first, second and third person, the Navajo language also has fourth person.

"That sent me out to learn a little bit more," he said. "You never know what's going to come at you. The most challenging and surprising questions are most often the most interesting."

He also feels a responsibility toward his peers.

"I wouldn't be where I am without what I've learned from them, so I've tried to fill that role as well as new people come in," he said.

While a Park Service career opens possibilities all over the country, Gatlin said he feels most at home in this region and doesn't plan to go far.

"I grew up in Colorado and spent a lot of my life rambling through the mountains of Colorado and the deserts of Utah and Arizona," he said. "I think I'd like to stay pretty close to the Four Corners area. There are a lot of great parks out there."

Even when off duty his interests take him outdoors. He and his wife, Maddie Tighe, like to hike and birdwatch - a passion Gatlin acquired here while visiting with volunteers from Hawkwatch International as they monitored raptor migrations over the Canyon.

Gatlin has two "Ranger Minute" programs on the park's Web site. He is also responsible for two wayside exhibits at Lipan Point.