Undefeated
No losses for WEMS Falcons 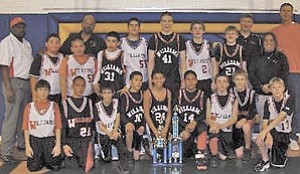 The Falcons were undefeated this year in an awesome season of basketball for Williams Elementary-Middle School.

It was a season to celebrate for Falcon basketball players at Williams Elementary-Middle School, as the boys team found themselves without a single loss for the season. Falcon players, from grades sixth through eighth, took home the first and second place victories at a Feb. 16 tournament in Ash Fork as well. The Falcons were coached by Edgar Brown, Jeff Brownlee, Melvin Berry, Mike Schulte and Deniz Chavez and took on a number of teams throughout their undefeated season, including teams from Ash Fork, Grand Canyon, Seligman and Parks.

"Our season went really well. We were totally undefeated the whole time," Chavez said. "We had over 30 boys that played basketball this season, so it was kind of rough, but we rotated them in and, at the tournament, we ended having two B teams and an A team. The only reason that we have one-second place trophy is because our B-2 had to play our B-1. They were in the championship bracket together. They did a fantastic job."

Chavez attributed the undefeated streak to the number of strong athletes currently on the Falcons team.

Practice, she added, also helped to get the kids into prime physical shape for the hoops season, which included a lot of running drills.

"With these kids, the running is the main point, because a lot of these other teams don't run quite as much I don't think, so a lot of them get tired very quickly. If you're in shape, you can outrun some of these teams. It really makes a difference. There were some games where you could see (that) some of the other kids were getting tired. Even some of our boys would get tired and we'd pull them out. Having the variety of kids that we had, we were able to trade out. We were switching kids out every half a quarter, we'd switch five or whatever, because we had so many kids. In order to get them all to play, you'd have to rotate them often. Our kids never really got that tired, because they were rotating so much. The other teams had fewer students. Some of them only had 12 or whatever."

Despite the high turnout for players on the Falcons team this year, Chavez predicts a smaller team for next year's basketball season, though not by much.

"I think we're going to shrink down a little, like I said, I only had five sixth graders and we're losing 12 eighth graders," Chavez said.