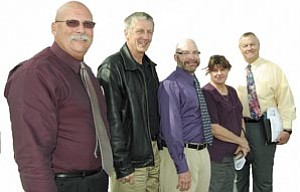 Schools in Ash Fork and Seligman may soon begin to see a leap in their technological education, thanks to a Joint Technological Education District (JTED) that officials with the Yavapai County School District hope to form this year. There are currently 11 JTEDS operating in the state of Arizona, according to Yavapai County School Superintendent Tim Carter, though one has yet to be formed for the Ash Fork, Seligman and Chino Valley areas. Carter said JTEDS were designed to offer career and technical education (CTE) courses to Arizona high school students.

"The Verde Valley area has a JTED, Coconino County has one, Williams is part of the Coconino County JTED, the western part of Yavapai County does not, so about a year ago we went to the boards and asked them to appoint a representative from their district to meet with us in forming a steering committee. The seven districts, which include Ash Fork and Seligman, along with Yavapai College, all appointed a member to that steering committee and then we had seven business partners, representing the seven career clusters that the school districts currently have. This 15 member steering committee has been working for more than a year to develop a plan, as to how would this work and all the details that kind of go along with it," Carter said.

"The plan is being distributed to the districts now. Chino Valley approved it, Seligman approved it," Carter said, adding that other districts, including Ash Fork are expected to have it approved as well.

"Once the boards have approved it, then we go to the state board in April and we don't think that's going to be problematic at all. Then we go back to the boards in May and June and we actually ask them to call for an election. The election would be in November, because it requires the voters' approval. The reason it requires voter approval is one, you're creating a new district, number two, the district statutorily has a five-cent per hundred tax levy. What that would do is that would create a tax of $5 on a $100,000 home. If the value of the property were $100,000 the taxpayer would support the JTED with $5. District-wise, looking at all seven of the districts, that generates about $800,000. The state would then put in about $1.4 million, so the proposed budget would be about $2.2 million in new funding for vocational programs in the first year."

Carter said the formation of a JTED would be beneficial to students in a number of ways, including college-bound and workforce-bound students.

"What a JTED does is it allows you, hopefully, not to change what you already have, but to add to it, to supplement it, and to make it available to all the kids in that district. If a student wanted to go to Ash Fork to take part in their welding program, they should be able to do that. If a student from Seligman wants to go to Chino to be a part of their AG program, they should be able to do that. The district will ultimately have a board. That board, working with the seven district boards, would actually create intergovernmental agreements to determine all the details, where it's going to be, who's going to teach it, what programs are going to be involved, the schedules, transportation, all those kinds of things that the new board would work out with the local board. The concept is that the students stays enrolled in their home school," Carter said.

Carter said the newly formed steering committee has made three decisions in regards to the program. They named the program, "Mountain Institute," expressed a desire to locate a central campus and operate some of their classrooms via satellite.

"A central campus might be at the old Reuger plant at the Airport in Prescott. It's about as close to the middle of those seven districts as you can get, it's right on some major arterials and Yavapai College would love to share the facility with us," Carter said. "The other part is you'd have satellite options on the existing campuses, which could be something where we actually provide transportation or it could be done by web cam, by IT or some other form."

Officials in both Ash Fork and Seligman schools believe the JTED would prove beneficial to students.

"What we are looking for is to provide opportunities to our students. One of the ones they have is gunsmithing and there's no way we could do gunsmithing," said Seligman Superintendent Todd Kissick. "What they've had in the past, when they've been able to find a teacher, was welding, automotive. We were lucky we had a sort of jack-of-all-trades there for about a year. This is a big plus. We're on a four-day week and so, there's a possibility of schedules. The JTED may have a Friday and Saturday option, plus some of our juniors and seniors are done by noon, so they could go down for half days."

"This is a great opportunity for us to share something academically," said Ash Fork Principal Jon E. Jones. "What happens in Seligman impacts us and what happens with us impacts Seligman, so it's a real natural fit for us. This is just a real great opportunity."