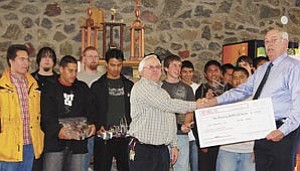 Members of the Williams Slab Crabs deliver their winning check to Williams High School Principal Steve Hudgens. The WHS Battlebots, such as the Slab Crab Revolution, won three awards during the recent state competition in Phoenix, including first and second place and an engineering award.

It seems the students on the Slab Crabs team at Williams High School (WHS) are just as unbeatable as the remote-controlled robots they create. The Crabs took their third consecutive win at the recent state BattleBot IQ championship tournament in Phoenix Feb. 15, where they won first and third place, as well as an engineering award for one of their robotic creations, the Boil This! Bot. WHS student Dylan Tobin designed a number of the robot's particulars via computer automated drafting (CAD) and said winning the engineering award felt good.

Tobin attributed some of this year's state award to the in-depth drawings the team produced in the design phase of creating the bots.

"We actually made some parts off of the drawings themselves, pre-rendered stuff," Tobin said.

Student Guillermo Duarte operated the new addition to the BattleBots' team for this year's state competition; the Slab Crab Revolution.

"It was kind of exciting. It was my first time driving," Duarte said.

Student Stephen Weber said there were a number of reasons why the team has placed first in the state BattleBot competition for the last three years in a row.

"Our industrial manufacturing class - you have two hours to work on bots. We have Mr. Gutshall, who's a great teacher, we have seniors, kind of veterans, who know what they're doing, so when it comes together in the CAD drawings, in the shop (we) come out with a great bot. We just put a lot of work into it. That's why I think we win," Weber said.

"You could take as many robots as you want. There were some schools that had four there," said WHS industrial manufacturing teacher Larry Gutshall. Gutshall has administered the team since its inception.

"You fight them and whoever wins, wins," he said.

After their Feb. 15 victory, with three trophies in hand, the Slab Crabs are looking toward the national competition, slated for April in Minnesota. This will be the Slab Crabs' third attempt at a national win, after missing the final cut in last year's challenge in Florida. The team took 13th place in the national standings in 2006.

"Our next event will be in Minnesota at the Mall of America, April 25, 26 and 27, and we will be fighting. All the robots from around the nation will be there. It's a national event. We're planning on winning it. We'd really like to win," Gutshall said.

The group also extended a special thank you to Williams resident Walt Eastland for his support of the team over the last few years, as well as the Williams Unified District Board Members, Jeanne Gillespie, and WHS Principal Steve Hudgens, among others.

"I want to thank everybody here in Williams. The tax credit money is great. Their support is just outstanding," Gutshall said. "Mark Weathers, from the Arizona Tooling and Manufacturing Association, and we need to thank one of our sponsors, Mar-Zee. They made our titanium weapon for us."