For her Papa
Ken McDaniel Memorial Rodeo is gearing up 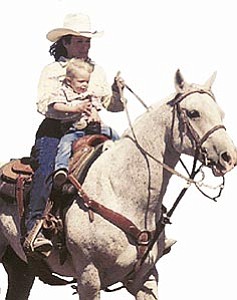 Terri Beeson, along with her son, leads the way in the first annual Ken McDaniel Memorial Rodeo, held in 2004. Plans are already under way for this year’s rodeo in Williams.

Rodeo producers Billy and Terri Beeson know exactly what it's like to put together a fun rodeo. They've held the Ken McDaniel Memorial Rodeo in northern Arizona for almost five years. This year will mark the second year the rodeo has been held in Williams, according to Williams native Terri Beeson. She began the rodeo as a way to honor her grandfather, Ken McDaniel, whom Beeson lovingly refers to as her "papa."

Ken McDaniel moved to the Williams area in the early 1960s with his family. Besides teaching Little League and volunteering his time for other community organizations, such as the local 4-H club, McDaniel also earned himself a place in Williams' history when he became the first rural mail carrier in the area. When McDaniel passed away in 2004 at the age of 73, his granddaughter, Terri Beeson, along with her husband Billy wanted to do something in his honor. McDaniel lived in the Williams area for nearly 25 years.

"He was such a great person. They just don't make 'em like him anymore," Beeson said. "Him and my grandma, they basically raised me and my brothers. When he died I was a number in his obituary and at his funeral I was just so devastated that I couldn't get up and talk about what a wonderful person he was," Beeson said. "During the grieving process I was saddened that I wasn't able to talk at his funeral and that I was a number in his obituary, because he meant so much to me, when they say 'He is survived by,' and then they put nine grandkids or whatever. I told Billy, 'Let's do a rodeo in memory of my papa,' to where everybody (would) know how much I loved him and how much he meant to me. Five and a half months later there was the first annual Ken McDaniel Memorial Rodeo."