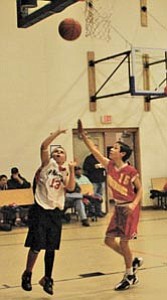 The Grand Canyon Middle School Phantoms boys basketball team ended their season last Saturday at the I-40 Conference Tournament held in Ash Fork. The A Team took second place after a two point loss to Williams, while the B Team ended in third. Though the loss was official when the buzzer sounded, Head Coach Andrew Aldaz said the team actually dropped the game at the free throw line where they made only 7 of 21 shots. "We had plenty of opportunities when we came to the line three different times down by 2 but we were unable to convert any of them," he said.