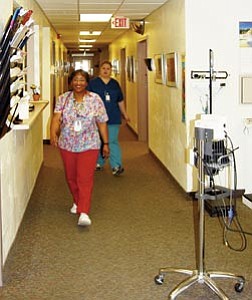 Health care employees, such as RN Nell Brown and medical assistant Christine Porr, pictured above, have seen an increase in illnesses at the Williams Banner Health Care Center, though no true cases of influenza have yet to be documented in the Williams area.

It starts with a sore throat for many people. Then come the back pains. Before you know it, you're laid up in bed with a box of tissue, a handful of cough drops and the remote control. While the symptoms may vary, getting sick is pretty common this time of year and never much fun.

Coconino County Health Department records for the year indicate a rise in influenza cases beginning in January, with 263 confirmed cases reported in the county this season. Reports of influenza have risen sharply since the third and fourth weeks of January, according to CCHD reports. In late January, the number of influenza-like illnesses (ILI) increased from 3 percent to 15.6 percent. ILI is defined as having a cough and/or a sore throat with a fever over 100 degrees. According to Cindy Christman, manager of the Williams Banner Health Care Center, there have been no documented cases of influenza in Williams.

"We do not have any documented cases of true influenza, however, we've seen a huge amount of upper respiratory, viral-type illnesses," Christman said, adding that some influenza cases have undoubtedly come through the health care center, but were not tested.

"There very well could be true cases. We've probably seen some. We just haven't documented it with the test," Christman said, adding that colds and other viruses have been on the rise in the Williams area.

"We're typically very busy, especially in the urgent care, in January and February and sometimes part of March. That isn't all respiratory or sore throats, we've seen a lot of weather related injuries, people falling on the ice, we've seen an increase in that as well. We've had a lot more snow that has stayed," Christman said. "I would say this year has been a little more intense. We've seen, probably, about a 12 percent increase in our urgent care over December. We're averaging between 30 and 40 patients a day through urgent care."

Due to a recent push by medical experts, people are being warned against the unnecessary use of antibiotics in relation to fighting the flu. Illnesses caused by viruses, such as the cold or the flu, are not helped by antibiotics, according to a report issued by the Centers for Disease Control and Prevention. Antibiotics however, can treat illnesses caused by bacteria, such as strep throat. Using too many antibiotics, according to the report, increases the chance of catching and developing infections that are highly resistant to antibiotics. Christman said that patients, often, will become frustrated when told that antibiotics won't help.

"Now you're seeing a lot of infections getting out of hand, because we've kind of overmedicated the population with antibiotics and now the strains of germs are stronger and stronger. The old way of thinking is that when you're sick you need an antibiotic, but if it's a virus then an antibiotic is not going to help and, I think, more and more doctors have taken a hard line with that. They feel like an antibiotic is unnecessary and, really, is not helpful at all if it's a viral infection. If it's a bacterial infection, there's ways to test for that and then the antibiotic is appropriate," Christman said.

According to county officials, this year's 2008 influenza season has probably not yet peaked, though the rise is expected to peak this month. In some cases, however, influenza seasons can continue well into May.

"With flu, we could have several peaks throughout the flu season. The numbers may go down in the next couple of weeks. However, we could see an increase after that. The flu is unpredictable. We always encourage people to get a flu shot. It's still out there," said Coconino County Health Department Community Relations manager Trish Lees.

Flu shots are currently offered in Flagstaff at a cost of $20, though children under 19-years-of-age, Medicare part B recipients, Blue Cross Blue Shield of Arizona recipients and AHCCCS AP/IPA recipients are free. Flagstaff clinics are held Mondays, Wednesdays and Fridays from 8-11:30 a.m.

Contact the Coconino County Health Department at (928) 522-7814 for more information.