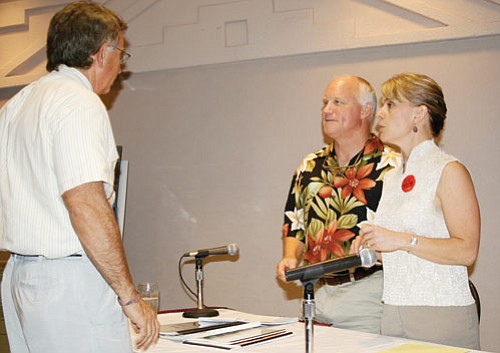 Clarinda Vail and Greg Bryan trade words with Justice Bill Sutton of Williams, who moderated a debate between both sides of the incorporation question.

The community of Tusayan faced its biggest challenge not only of the year, but perhaps in its history, as it grappled with the question of whether or not to incorporate. After a contentious summer-long campaign that polarized much of the community, the measure failed with 78 votes against, 62 in favor.

The pro-incorporation group, Citizens for Tusayan Incorporation Choice, filed the petition to put the question on the ballot in the spring, and a special election was set for Sept. 2.

The process was spearheaded by Best Western Squire General Manager Greg Bryan, who served as chairman of a five-person committee that spent four years studying the pros and cons of incorporation.

Two of them - lifelong residents Vail and Thurston - formed an opposition group, The Price is Not Right: Vote NO on Tusayan Incorporation.

Proponents argued that incorporation would give Tusayan a revenue stream of $2.5 million from sales taxes and state money that only goes to incorporated towns and would help develop a stable residential base to keep community-minded people here.

Key supporters were Elling Halvorson, who has owned numerous properties in the community for over three decades, and developers Stilo Corp., who had promised 40 acres of land for housing in exchange for a zoning change on their forest inholdings - about 250 acres between two properties.

Opponents argued that the community had moved forward without incorporation, pointing to accomplishments like building a new fire station, running an award-winning sanitary district and acquiring 80 acres of land for the school.

They also argued that conflicts of interest were unavoidable in a community with so little diversity in its commercial base.

As an alternative to incorporation, they pushed for a change in legislation that would allow communities near national parks establish a special districts to levy sales taxes. It failed to come to a vote in the state legislature but could come back next session.

The debate also brought residents' concerns to the forefront, particularly about housing. Both sides agreed to work on solutions for that community need regardless of how the vote went.