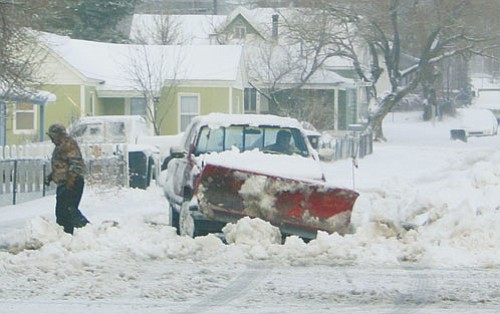 Schools in Williams were closed for three days straight as snow fell over the area Dec. 15-18, 2008.

Crews with the city of Williams drive down Route 66 during the second snow storm of the week on Dec. 18.

Schools in Williams were closed for three days straight as snow fell over the area Dec. 15-18, leaving a little over 20 inches of the white stuff in some areas, creating icy roads and hazardous conditions throughout most of northern Arizona. A number of businesses and local employers closed their doors Dec. 16 due to drifting snow and icy conditions, including the district office of the Williams Ranger District among others. Scheduled events for Dec. 17 were also cancelled, such as a series of Christmas concerts at the Williams Elementary-Middle School. Other school functions, including the regular meeting of the Williams School District Governing Board and the winter semester dinner, a treat for parents and locals, was also cancelled. The Williams Senior Center Holiday Luncheon, scheduled for Dec. 17, was cancelled due to falling snow. Certain city-run facilities, such as the Williams Aquatic Center, closed early due to the winter storm. Williams-Grand Canyon Chamber of Commerce officials cancelled their regularly scheduled board meeting Dec. 16 as a result of the storm.

According to Williams Police Chief Herman Nixon, the most hazardous aspect of any winter storm, last week's snow included, are drivers who fail to slow down while traveling on icy roads.

"We see the same issues we have every year with drivers driving too fast. We've had several slide-offs and a couple accidents due to the weather. No major injuries," Nixon said. "Speed is always a factor. People just need to slow down."

Whenever a strong snowstorm moves through the area, Nixon said police focus on two top concerns: drivers and the elderly. Most of the vehicle-related accidents in the recent snowstorm, he said, were caused by tourists visiting the area.

"Our biggest concern is the drivers driving safely and slow and not being in a hurry to get somewhere, coming up to the intersections too fast, if you don't have to go somewhere don't go out in the streets," Nixon said. "The roadways have been slick, although city crews are doing a great job cleaning it up. We're seeing more slide-offs. "

When it comes to Williams' older and infirm residents, Nixon said the police department will help out where they can, such as with snow removal, food deliveries and medication deliveries.

"We will do things for the citizens that are unable to do it, like the elderly," Nixon said. "We try to help as much as we can."