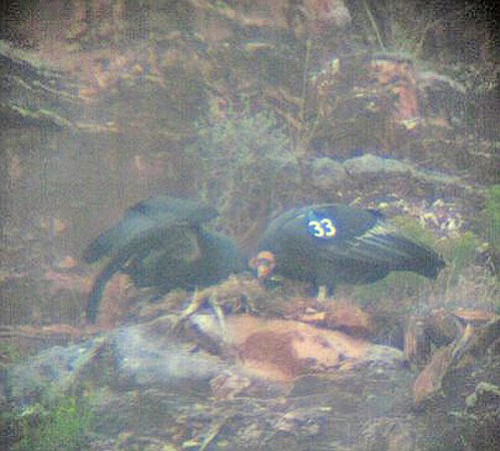 The Grandeur Point chick and its mom, photographed from long-range.

They join Arizona's population of nearly 70 free-flying birds and bring the world's total population to more than 320.

In mid-October, Chick 472 was seen taking short flights in the Salt Creek area. Its parents, condors 127F and 123M, were also parents of 305, Arizona's first wild-born condor in more than a century.

The second chick, 476, belongs to first-time parents 133F and 187M who nested near Grandeur Point. The mother has her own place in condor history. She is the last remaining bird from the initial Arizona condor release in 1996. Her chick was seen taking its first short flights in September.

It was not until reintroduction in northern Arizona began in 1996 that condors were once again seen flying over the Grand Canyon. As recently as 1982, the world population was down to 22 and by 1987, all of the world's remaining California condors were in captivity. Today, about half of the world's condors are free-flying and eight of the nine wild-born birds are still alive. The first-born, 305, died of starvation in 2006.

California condors are North America's largest flying land birds with a wing span of over nine feet. They are primarily soarers, sometimes going for miles without a single flap of their wings. As a result, they prefer to live in areas with mountains, gorges, and hillsides, which create updrafts and provide favorable soaring conditions.

Condors also require caves, ledges or large tree cavities for nesting. The Grand Canyon area would seem to be perfect condor habitat, and evidence indicates that the birds did nest in the canyon for thousands of years.

However, as climates changed after the last ice age and, more recently, as human impacts increased, the condor's range shifted and numbers dwindled. The last wild condor in Arizona was sighted near Williams in 1924.

Though it is further from the brink of extinction than it was a quarter century ago, the California condor's long-term survival is far from assured.

The birds are normally long-lived, and don't reach maturity until they are about six years of age. As a result, they are not prolific reproducers, usually only tending one egg every other year. Yet, they are regularly faced with threats such as lead poisoning from spent ammunition, predation, and accidental and intentional shooting.

The recovery plan for the California condor calls for the maintenance of three distinct condor populations - two in the wild and one in captivity - each having at least 150 members and including at least 15 breeding pairs of birds.

There is a long way to go to reach that goal; but recovery efforts by committed organizations continue. The Peregrine Fund, Arizona Game and Fish Department, Utah Division of Wildlife Resources, Bureau of Land Management, National Park Service and U.S. Fish and Wildlife Service are only a few of the many organizations that have banded together to work on condor recovery.

To learn more about California condors, the on-going recovery effort and what you can do, visit the Arizona Game and Fish Department at www.azgfd.gov/condor or the Peregrine Fund at www.peregrinefund.org.