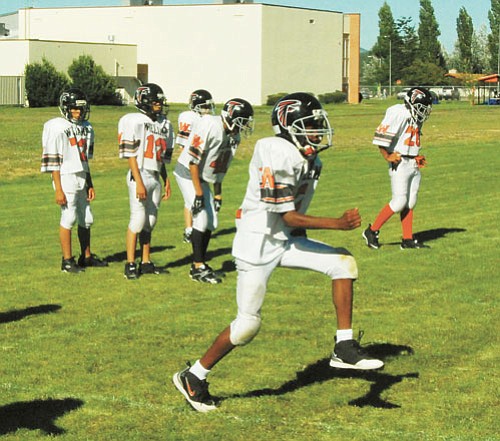 The Williams Elementary-Middle School (WEMS) Falcons football team has a big season ahead them, though the team is already off to a good start. The middle school players began the year with a strong win against Camp Verde and looks poised for a strong season, one that will include playoff games as well. Coaches Deniz Chavez, Herman Nixon, Phillip Martin and Jeff Brownlee coach the Falcons.

"We've been practicing for the last two weeks and our practices have been real good, the kids have been just working their tails off," Brownlee said. "Fortunately we had two good weeks of practice. Our kids are ready to hit somebody else, somebody new."

The Falcons brought their enthusiasm with them when they played their first game of the season against the Camp Verde Cowboys Aug. 19. Williams ended the game with a strong 43-8 victory. Brownlee said the win was thanks to a strong team effort on the part of all the players on the Falcons.

"They were very disciplined that game and they did very well," Brownlee said. "They did very well for our first game. Things went our way. Initially I was worried about our line speed. We were big and medium fast."

He said the offensive and defensive line constituted the most improved portion of the Falcons team.

"We do a lot of agility drills and a lot of sprints and I attribute it to that," Brownlee said. "There are a couple of ballplayers that, when we first started practicing, they had a hard time just running 20 yards and I'm serious about that. Now they can run 20 yards, 30 yards. It may not be blazing speed like the running backs, but the offensive line and the defensive line have improved so much on their speed and on their endurance. And that was really the key to the game was the offensive and defensive line."

There are currently about 21 football players on the Falcons team, according to Brownlee.

"Right now we have less than that, because we're fighting colds and kids getting homework done and stuff like that," he said. "For junior high, for Williams, 21 kids is probably about the average. Last year we had 28 kids. You need 21 kids playing the whole season, too, and everyone plays. It's like a big puzzle, everyone has their piece and they help the whole team gel."

Brownlee said the team was four and four for the season last year. This year, the Falcons will play a total of 11 games.

"It's kind a neat thing. This league we're in, we have 11 games (and) we actually have a playoff system, which we didn't have last year, but I have high expectations for this team. Every school we play this year is a larger school than us," Brownlee said. "I'm talking about four Prescott schools, Chino Valley, Camp Verde, Mingus, Cottonwood, and Sedona, so we play a lot of games and the schools are all bigger than us."

Some of the Falcons players, he said, bring a lot of experience to the game, however. Some have been playing the sport for five or six years.

"That helps, immensely, because they understand the game," Brownlee said. "They were all in youth football."

He said the move to a playoff system was initiated by coaches and officials in the Prescott area.

"I'm excited about it. I think all the football coaches decided to get together and said, 'Hey, instead of just playing games, let's play games and have a playoff season.' Our athletic director, Rick Shipley, he was all for it. He talked to the coaches and we were all for it, even though we're playing bigger schools. The more experience and the more games these kids play will help them in the high school years," Brownlee said.

The Falcons will play their next game this Saturday, beginning at noon, on the fields of Williams High School.