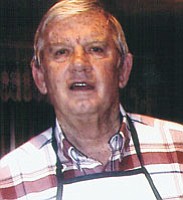 Don was born in Oklahoma City, Okla. and raised in Tucson.

Don began his career in the lumber business with Payless Cashways in 1959, culminating with the founding of Odds-N-Ends Lumber in 1975, now doing business as Homco Ace Home Center in Flagstaff. Don's Oklahoma roots kindled his real passion, which was farming and ranching. Don has been a respected rancher in northern Arizona for the last 30 years.

Don was an honest, caring and loving husband, father and grandfather. He will be greatly missed by his loving wife of 31 years, Erma; his daughter Lisa; his three sons Mike, Kevin and Doug, along with their wives Penne, Desiree and Joy; his seven grandchildren Katy, Page, Eilis, Korryn, Mollie, Konner and Shelby; his lifelong friend Beverly O'Connor; and many other friends and family.