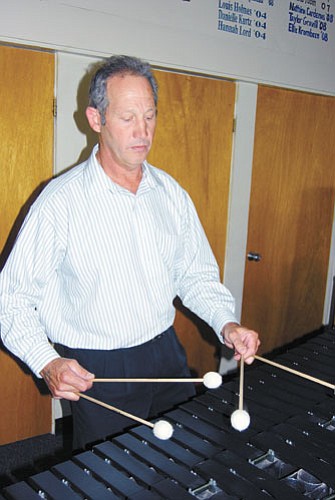 The sound of music can be heard at both the Williams Elementary-Middle School and Williams High School (WHS), thanks to the addition of new band director John Priest. Priest replaces longtime Williams Unified School District (WUSD) band director Scott Grimes, who resigned from his position at the end of the last school year. Priest filled the position after moving to Arizona.

He said he has taught in schools for roughly 15 years throughout the Pacific Northwest, including Idaho and Wyoming among other locations. He received his bachelor's degree in music education from the Idaho State University and his master's degree from the University of Idaho.

"I went into teaching music after I got enrolled in college," Priest said. "I'm a percussion major. My main instrument is the marimba."

Aside from teaching, Priest said he is also a fan of sports, including cross-country running, tennis, golf and other sports. He's been a music director, he said, in a number of different areas of music, such as jazz, choir and marching bands.

"Some of the bands have gone to state competitions and have received awards along those lines," Priest said, adding that his goals for the music program in the WUSD is to develop and maintain what he called an "outstanding" music department.

"We're trying to develop some more programs at the high school in conjunction with (WHS Principal) Hudgens, whether it's before school, after school or during lunchtime, so the students have another venue, another area that they can pursue, such as jazz band or choir, and, of course, to keep along with the traditions of excellence as set forth by the WHS band in the past," Priest said. "You can always expect changes with a new band director. I'm looking forward to having a pep band for the basketball games - that might be a positive change. We need all the support we can get from the community members with regard to the music department in general."

He said the program is progressing, albeit slowly.

"The previous band director had been here for an extended period of time and it's all new to (students)," Priest said. "It's going to take some adjustment."

While there are plans for performances, such as the holiday concert at the Williams-Elementary Middle School, dates for the performances have not been set.

"We really don't know," Priest said. "We're working on establishing the band. As far as the concerts, it's just up in the air at this juncture. New teacher, new everything. We're going to have the upcoming Christmas concert and spring concert."

Grimes retired from his position in July, leading to concern over the future of the band program in Williams from parents in the school district. Besides his work with the school bands, Grimes also operated the Fifth Regimental Cavalry Band in the Williams area.