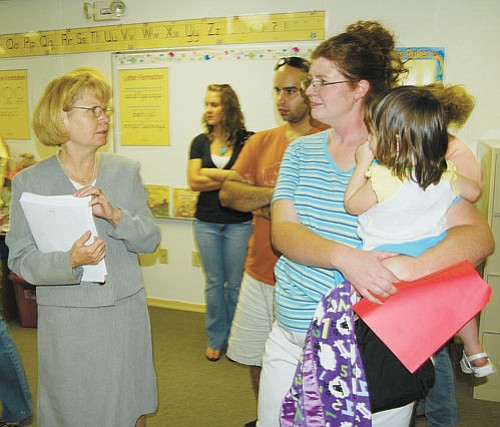 <br>Photos by Patrick Whitehurst/WGCN<br> Kindergarten teacher Cynthia Anderson (top) speaks with a parent during a meet the teacher night Aug. 18 at Heritage Elementary School. Parents and students (below) explore the new kindergarten classroom at the school.

Officials with Heritage Elementary charter school, located along Rodeo Road, opened the 2008-2009 school year with a number of new offerings for students in the Williams area. The biggest of those changes is the new addition to their complex, which allows students to attend the school up to fifth grade. Formerly known as Liberty Traditional, the school offered classes up to third grade last year.

Owner Aaron Robinson said the additional building on the campus gives parents in the community more choices when it comes to making decisions regarding the education of their children.

"Building the new facility allows us to go up to fifth grade," Robinson said. "We're going to start the new school year, kindergarten through fifth and simply go from there year by year. The beauty of it is that it allows us to serve more people in the local community and offer them a choice for their education."

Heritage Elementary School now offers five classrooms to students, as well as breakfast and lunch and even bussing.

There are currently 52 students signed up at the school, Robinson said, though enrollment in the public school is open after the start of the year as well. Robinson said his ultimate goal is to average around 100 students each year.

Besides the Williams location, Robinson also operates Heritage schools in the Phoenix area.

"Our main campus down in the Glendale area has 943 (students) starting classes," Robinson said.

Other changes for the school may include a soccer field as well, he added.

"We've been given permission by the owners of the property to the east of the campus to fence off an area and set up a soccer field. It will give the kids an opportunity to run and play and kick a soccer ball. I hope to get it up within the next couple of weeks," Robinson said.

Education at Heritage Elementary consists of a number of programs, including the Spalding Phonics program.

"The Department of Ed calls for Arizona students to become independent readers by third grade, but if you look at the curriculum for whole language it goes for eight years," Robinson said. "The (Spalding) program is very structured. It's teaches a child how to sit, when they're writing, how to hold a pencil, it's a total language arts, it teaches them how to construct paragraph forms, develop comprehension skills in reading and listening."

He said parents can expect a quality education for children who attend the school as well as a safe and comfortable campus. He said the school, since it's beginnings in 2007, has been received well.

"I can understand some of the anxiety, perhaps, of some of the parents that have been here for a period of time and they have seen a previous charter school come and go, that was a high school. We're a traditional elementary school. We're here to stay," Robinson said.