Food Bank branches out
Open House to be held Friday 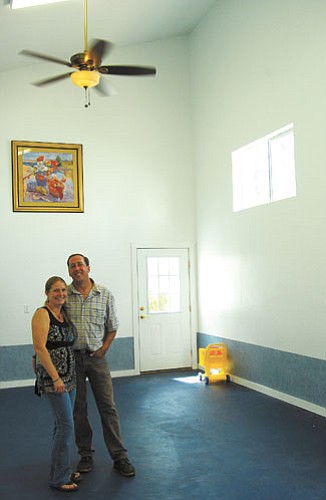 Officials with the Williams Food Bank will open their doors to the public this Friday when they host a Williams-Grand Canyon Chamber of Commerce mixer from 5-7 p.m. The new location for the Williams Food Bank, which can be found right behind their old 200 S. Ninth St. site, was completed earlier this year. While the group once shared the food bank with the St. Agnes Apartments, the new location will be used solely for the purpose of distributing food to those who need it.

The mixer will not only offer attendees a chance to see the new food bank building, but organizers are also planning a number of fun events as well, including a 50/50 drawing to benefit the food bank, raffles, drinks and appetizers. Food item donations will also be accepted during the mixer.

Labor on the new food bank began after Thanksgiving of last year. Crews with Reyes Construction worked on the 30-foot by 30-foot building. The building itself was made possible thanks to a donation from an anonymous source, said food bank co-organizer Guy Mikkelsen. The front room of the new building will offer shelving and areas where food can be distributed, much the same as a small grocery store. The back area houses a walk-in cooler, for storage and for loading.

"The new building is an independent space for the food bank," Mikkelsen said. "For the first time we'll be able to store, sort and pass out the food in an autonomous area without interfering with the residents' community room and the maintenance area of the apartment complex. The cooler was a grant through the Arizona Association of Food Banks that was part of collaboration between DES and the USDA Rural Development. Many legislators apparently worked for two years getting the funding for 15 of these coolers for rural food banks around the state and we were one of the recipients."

The food bank will begin operating from the new building Aug. 29.

"Here it stands ready to serve the needs of the community," Mikkelsen said.

"The 20 foot walk-in that we have is going to help us in saving the gleanings that we get all week and it's going to be able to provide for us to be able to have dairy products and things of that nature brought to us from the warehouse," Mikkelsen said.

Mikkelsen said she has been hard at work on the new building in preparation for their upcoming opening, as well as for Friday's Williams-Grand Canyon Chamber of Commerce mixer.

"We're going to have raffle prizes. I'm going to have gift certificates for Old Smoky's, Grand Canyon Coffee and Café, JD's Espresso, Motel 6 here in town," she said. Other prizes will include a stay in Ouray, Colorado and at Harrah's in Laughlin, Mikkelsen said.

Residents at the St. Agnes Apartments in Williams will also be treated to a remodeled community room in the coming months as well, according to Mikkelsen. who said there are plans to remodel the area once the new food bank opens its doors. Some residents of the 25-apartment complex, besides donating their time to help with the food bank, also shared their space with the food bank by hosting the bank in their community room.

"The residents here have been sharing their common area for us to be able to have a food bank for four years," Guy Mikkelsen said. "With their space back, we want to refurbish and remodel that for them and hopefully make it as new as the food bank building is - a new space for them to enjoy."

With a growing demand, the group has been seeking new sources of food. In 2007, the Williams Food Bank distributed over 4,000 food boxes alone. Donated food comes from a number of local charities, including Pine Country Restaurant, Pancho McGillicuddy's and Doc Holliday's Steak House. A number of businesses donated for the group's holiday food drive. Last year, the Williams Food Bank handed out meals to 150 families for Christmas, 160 families for Thanksgiving and 120 families for Easter. Northern Arizona companies such as Nestle Purina and Coca-Cola have also donated to the Williams group.