On your mark, get set, Cruise-in!
Tons of events on tap for Twisters’ Cool Country Cruise-in 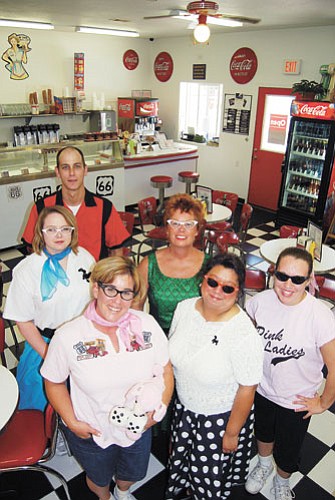 <br>Patrick Whitehurst/WGCN<br> Pictured from left to right is Jason Moore, Stefanie Moore, Sue Atkinson, Kim Winter, Pimi Bennett and Chardell Bennett at Twisters ‘50s Soda Fountain and Route 66 Cafe. Organizers have been working hard to put together this year’s Cool Country Cruise-in and Route 66 Festival, which will kick off Friday with a burger burn at 11 a.m.

Music, burgers and cool cars. What more could anyone want? Just in case that isn't enough, however, there will also be a raffle, poker walk and a pageant - all for one of the city's most popular annual events. This year's Twisters Cool Country Cruise-in and Route 66 Festival is shaping up to be one of the biggest yet and organizers are inviting locals and visitors alike down to the main drag to take part in the fun.

Cars are expected to begin lining Route 66 early Friday and will remain through Saturday evening for the car awards presentation.

Twisters' owners Jason and Stefanie Moore put on the event. Twisters is located at 417 E. Route 66.

When Moore and her husband Jason bought Twisters roughly two and a half years ago, the two decided they would carry on the tradition of offering the event each year.

"It seems to be a really popular event," she said. "We have people that come from all over the state (and) from out of state, Nevada, California. It's an event that people start calling us about starting January 1 every year, wondering when is the Cruise-in? What do I need to do to register? They are ready to go."

The famous "burger burn" will also be held during the Cruise-in for the whole community, whether one is registered for the car show or not. Locals and car enthusiasts are all invited to come down for the burn, Moore said.

"We have a burger burn Friday and Saturday. It's from 11 a.m. to 1 p.m.," Moore said. "My husband Jason does all the cooking on the big char broiler out there. A cheeseburger, a bag of chips and a coke for $5. You can't beat it."

A total of 35 car trophies will be awarded this year as well, Moore said.

A number of events are planned for Friday, including the burger burn from 11 a.m. to 1 p.m., a daytime 50/50 draw and the fifth annual Miss Williams Route 66 Pageant beginning at 7 p.m. at the Sultana Banquet Hall. Car registration for the Cruise-in begins at 11 a.m. and will continue to 3 p.m. Music and Sock Hop dancing will take center stage from 6-9 p.m. at Twisters.

"Friday night we have Hack and the 57's, which is the band we have every year, who are fantastic," Moore said. "They are actually pretty well known throughout the U.S. for their '50s and '60s rock-n-roll music. They're always a lot of fun. We'll have dancing in our front parking lot.

"Saturday we'll have a local band called the Sweet Lemon. They're back together after 37 years. They were a high school band here at Williams High School from '69 through '70. They'll be playing for donations to the Williams Food Bank. They're really fun (and) they have a blast when they're out there. Everybody loves them and we'd like all the locals to come down and check them out," Moore said.

The burger burn, cars, a poker walk and awards are planned for Saturday. The awards will begin at 3 p.m. Moore said that Saturday's Poker Walk, from 10 a.m. to 2 p.m., is for registered entrants only. Players can win $300 for first place, $200 for second and $100 for third. Poker walk stops will include Nana's Toy Box, Gracie's Clothing and More, Native American, Typhoon Saloon, Cowboy Store and the Christmas Tree Gallery.

"We have six different local businesses where registered entrants will stop and get a card for their best poker hand, that's five cards out of six," Moore said. "We'll have cash prizes and a booby prize for the worst poker hand. Last year it was one of our locals that won it."

"Last year we had probably over 200 cars that registered and we're looking to add on to that," she said. "I think that's what's so great about this event, it's not just for the tourists or the cars; locals enjoy this just as well. It's a real community event."

She said organizers are hoping to top last year's numbers for attendance at the event.