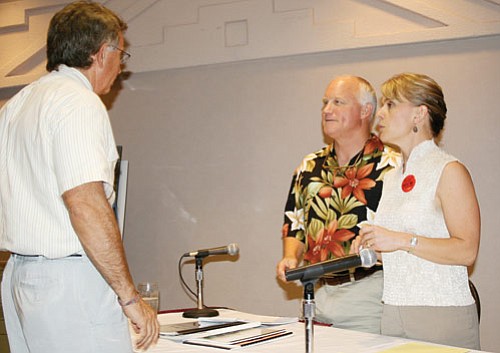 More than 75 people attended the two-hour forum, which was held last Thursday at the Best Western Squire Inn. Squire General Manager Greg Bryan represented incorporation proponents while Clarinda Vail of Red Feather Properties spoke on behalf of the anti-incorporation side. Moderator was Judge Bill Sutton, who has led debates for town council candidates in his hometown of Williams.

Vail and Bryan gave opening statements and had an opportunity to rebut each other. After asking for some clarifications, Sutton presented about 30 questions offered by residents.

Vail said that incorporation is about "massive commercial development" on more than 300 acres of private inholdings currently zoned as open space. Bryan said that it is about building "a real community as opposed to what we refer to as a company town."

"I feel incorporation is not about you. It's about them," said Vail.

Bryan said that while no one on the pro-incorporation committee has the opportunity to own property here, some of those who oppose it already do.

"The opponents have their own housing," he said. "We are tied to our employer. Lose your job, lose your home. It's not a very conducive way to build longevity and certainly no way to build roots."

Vail argued that many second- and third-generation families live here, drawn by the quality of life

"They're people who have decided that the small, rural nature of our community, with controlled growth, are where they want to be and raise their families. They've made an investment in the area and made it happen," she said.

But Bryan cited three separate planning studies that incorporation opponents helped prepare. He said that previously, they endorsed the vision now being put forth by incorporation proponents, particularly for commercial development on the 18 acres of residential land at the campground behind We Cook.

Following a successful incorporation vote and rezoning of this land and 355 acres of forest inholdings, the developer, Stilo Corp., has promised Tusayan 40 acres of residential land.

Bryan said there is nothing underhanded about the deal.

"The developers of that land need zoning and we need inexpensive land for housing and residential ownership opportunities," he said. "It's called a trade. It happens every day in communities all across America. It's nothing dark, nothing illegal and it's certainly not nefarious. It's how communities operate and improve their communities."

Vail noted that the land is located in a major flood plain and would be expensive to develop.

"If you've been out to the Kotzin at all, it's a beautiful piece of property but it is in an extreme flood plain," she said. "Is it possible to build in? Yes, but you're not talking about a little flood plain."

Bryan said the developers offered that parcel because it's closest to the new school site, but ultimately, they promise 40 acres of viable land.

"The landowners here at Kotzin said we want to do what is right," he said. "They've committed that they will work with the city council to pick 40 contiguous acres within their site ... It's important to note that the exact piece right here is open for discussion and negotiation."

The community would appoint a housing authority to manage the land under a deed restriction to keep it affordable and allow only Tusayan residents to live in primary homes there.

"What kind of equity is that if you can't resell to whoever you choose on the open market and at a fair market rate?" Vail asked. "What if the authority can't can't afford to buy it back?"

Because those homes wouldn't be tied to employment, Bryan said it would allow residents to establish the roots to build a viable base of invested residents to staff boards.

"There are small towns all over America that operate and find ways to address conflicts of interest," he said. "Why can't we do it here?"

Vail countered that not many small towns are based on just one industry.

They also sparred over whether or not Tusayan could afford the cost of meeting the state requirement for police protection, upkeep of roads, hiring a municipal staff and insuring itself against liability.

Bryan cited a study done by former Northern Arizona University professor Dr. Dan Cothran, who said that Tusayan could realize $2 million in revenue from a 2 percent sales tax and 2 percent hospitality excise tax, with another half-million coming from revenue sharing from the state. He said that based on expenses in that report, an incorporated Tusayan would have a 20-percent surplus.

"We consider that conservative when instead of figuring $1 you figure a dollar and a half for expenses and conservative revenues, instead of saying $2, you say $1.75," he said.

Vail countered that the $769,000 estimate to provide police protection was based on current fire district boundaries of 12 sections, not the 29 within the proposed incorporation boundaries.

"I have no idea what that proposal would be now from the Coconino County Sheriff's Office to try to keep one person on at all times in that 29 sections," she said.

That led to disagreement on how to calculate growth under incorporation. Vail said the community would grow 129 times from its current size of 144 acres, to 18,560. Bryan said that much of that would still belong to the Forest Service and be closed to any development. Actual growth would be a little under three and a half times, he said, from 144 to almost 500 developable acres.

As an alternative to incorporation, Vail said that Red Feather Properties is working with the state on legislation that would allow a special facilities district funded with a sales tax. That bill stalled, along with 50 others, on the final day of the legislative session while lawmakers debated for six hours about gay marriage. She said it had wide support and if it passes, it would enable the community to raise revenue without the financial obligations of an incorporated town.

Bryan said that legislation was drafted without input from other businesses and would not address housing needs for the community.