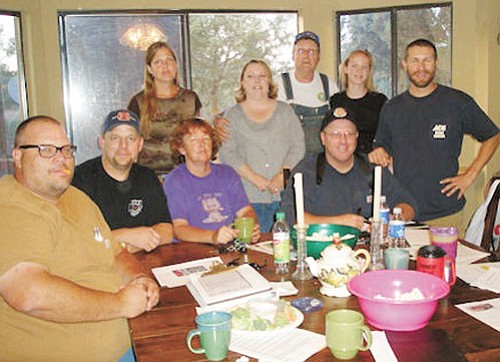 A new fire and emergency response team will soon be in action north of Williams along Highway 64. High Country Fire Rescue, a private, non-profit company, expects to cover an area along Highway 64 from mile marker 188 to mile marker 205. The department plans to cover private citizens and commercial entities that are not covered by another district or fire department, said High Country Fire Rescue Chief Robert Small.

"Our service area is going to be from mile marker 188 to mile marker 205 on the Highway 64 corridor and then three to five miles on either side," Small said. "It includes the Lake Kaibab park area, the Red Lake area, Lake Kaibab south and Lake Kaibab west. There's an expanse of land out there. It's a big area."

The newly formed organization is currently seeking homeowners and business owners who wish to subscribe to the group's services. Subscription prices are based on the square-footage of a home or business, Small said.

"Right now we have our rescue vehicle. We are certified in first responders," Small said, adding that, though the group does not yet have a fire truck, one will be on hand soon.

"We're in the process of getting the truck over here and getting it serviceable," he said. "If we had a problem right now, we would have to rely on the other departments, but we have (a truck). It's just getting it here."

Officials with the fire rescue organization are also members of the WFAC (Wildland Fire Advisory Council). Besides firefighters, personnel in the group also offer Emergency Medical Services (EMS) as well. Officials with the fire rescue operation are also currently seeking volunteers for a number of services besides firefighters and first responders. Upcoming needs may include an outreach coordinator and pet shelter locations, among other things, Small said.

"We're looking for people that are concerned and willing to give back to the community. We're looking for experienced people but it's not a necessity," Small said. "We can do in-house training. We have a total of about 13 people right now. That's not big, but it's a start. Our motto is ARK, what that stands for is Acts of Random Kindness. That's what our motto is. We've got EMTs, RNs, working in the capacity of EMTS and we've got three people that want to go to EMT school," Small said. "We're going to have a good coverage of medical experience."

"What we as High Country Fire Rescue are about is giving back to the community. We want to help the entire community, not just a select few," Small said. "We're here to help the community. This is medical and also fire. There are a lot of retired people out here and we have had a number of people that are bed ridden for a short time for some illness or something like that and they have literally fallen out of bed. We will do services like that, too."