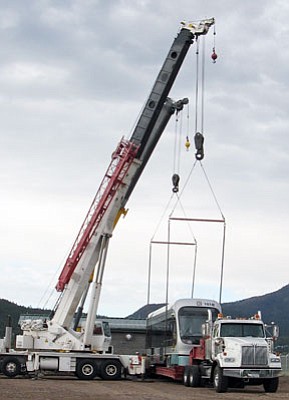 <br>Submitted photo<br> Crews offload the LRV mockup after it arrived in Williams.

On July 25, the Kinkisharyo International Light Rail Vehicle Mockup built for the Metro Light Rail system in Phoenix and surrounding communities arrived in Williams. It will be temporarily stored at the city's water treatment plant north of Interstate 40. The mockup's final destination will be as an educational exhibit in Williams' Arizona State Railroad Museum.

Built as a training mockup for Metro LRV operators by Kinkisharyo International, LLC at their plant in Japan, it made its public debut in Phoenix on Nov. 10, 2005. Although the donation was agreed upon last year, Metro Light Rail officials formally donated the mockup to the museum in April of this year in a ceremony at the Metro offices in Phoenix. Funding for the move was provided by a Department of Transportation TEA-21 grant administered by the Arizona Department of Transportation.

The mockup will allow visitors an opportunity to experience operation of a modern light rail vehicle. In recent years mass rail transit has proved to be highly successful in cities across the country. Light rail and commuter rail transportation will make their debut in Phoenix and adjacent cities this December and in coming months. This exhibit will be the center piece of Arizona's present and future passenger service.

Loading, movement, and unloading of the 50-foot long unit was handled by Southwest Industrial Rigging of Phoenix and Flagstaff. The move began July 24 at the Metro yards in east Phoenix. After loading the unit traveled to Williams via I-17 and I-40. It was offloaded July 25 in a secure area at the city of Williams water treatment plant. The city and museum are partners in this endeavor and this is but one of their cooperative efforts to bring this project to fruition.

The museum's focus is on the past, present, and future of Arizona's railroads with an emphasis on our cultural and ethnic legacy. An Arizona Centennial 2012 Legacy Project, the museum's exhibits will portray our history as relates to mining, logging, ranching, agricultural, military, manufacturing, passenger and freight service by the seventy-six railroads that operated literally in every corner of the state.

Three semi trailers have been donated to the museum by Swift Transportation and also arrived in Williams recently. One of the trailers contained the AT&SFRy's collection of more than 10,000 historic engineering drawings donated to the museum by the Winslow Historical Society. This extremely valuable collection will be housed in the museum's archives and are available for research. The other trailers will provide temporary storage of artifacts destined for the museum's educational exhibits.

Backdrops for the human stories will be the locomotives and rolling stock of these railroads. To date, the fledgling museum has acquired artifacts valued at more than $2.1 million donated by corporations and individuals in Arizona and across the country.