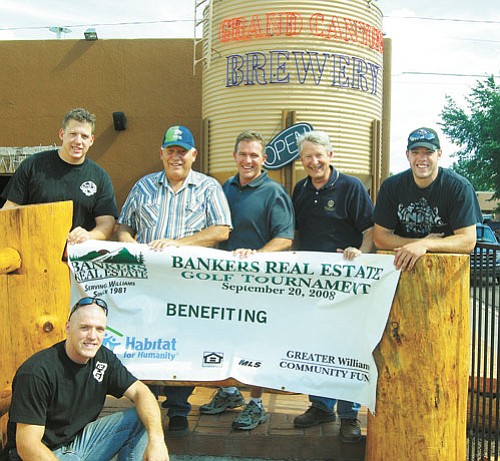 The annual Bankers Real Estate Golf Tournament is right around the corner and organizers are gearing up for another big success for the popular tourney. The annual game will begin with a shotgun start at 10 a.m. Sept. 20 at Elephant Rocks Golf Course. Russ Walton will emcee. The Grand Canyon Brewery sponsors the event. A Williams-Grand Canyon Chamber of Commerce Mixer is also planned at Wild West Junction, with proceeds going to the tournament. The mixer will be held Sept. 19 from 5-7 p.m. and will offer appetizers and drinks, a 50/50 drawing, door prizes, a raffle and a silent auction.

According to organizer John Rushton, the event is one of the most popular of its kind.

"The golf tournament used to be the Kevin Twitty Memorial Golf Tournament," Rushton said. "Last year they decided they were not going to do the tournament anymore. It's been going on for seven years. I hated to see it not happen. It was one of the most successful tournaments of the year, one of the funnest tournaments that I have ever golfed in."

Rushton and Bankers Real Estate were the tournament's largest sponsors in past years.

"I decided to take on the labor of putting on the golf tournament. Between me and my committee that I put together," Rushton said.

Fifty percent of the proceeds from the non-profit golf tournament go toward the Williams Habitat for Humanity organization, while another 50 percent goes to the Williams Community Fund, Rushton said.

As the tournament will not be held until September there are still plenty of opening for golfers to sign up. Committee members are also currently seeking sponsors for the annual tournament. Donations are also welcome, Rushton said.

"Golfers are our most important focus right now. We want to pull in golfers and, obviously, sponsorships. Sponsorships range anywhere from $150 to $2,000 in sponsorships. We're hoping to raise somewhere around the realm of $30,000 to $40,000," Rushton said. "It's a serious tournament, where serious golfers come out, but it's also a very fun golf. A lot of first time golfers come out and they have fun, so we invite the most serious golfers to the beginners and want everyone to just have fun. There are a lot of different events, like the longest drive, the longest putt, the straightest drive, all that kind of stuff happens during the tournament as well. At the 18th hole we'll be giving away a Chevy HHR, so that's an 18th hole hole-in-one. We're trying to get a second car for the 14th hole. There will be a lot of prizes involved. A lot of giveaways, a lot of raffle tickets."

Rushton said plans for this year's event have been progressing well.

"It's shaping together. We've got everybody all lined up for all the staffing, the volunteers from Kiwanis, from Rotary, from the Elks and American Legion, a lot of people from the community have really pulled together for volunteer work," Rushton said.

More information on the golf tournament can be found online at www.bankersrealestate.com/golf or by calling (928) 635-4404.