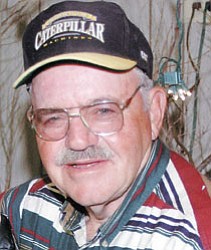 Virgil Raymond Curry was born to Bob and Mabel Curry in Parks on April 15, 1938. He was the youngest of five children.

Virgil married Sandie Thompson on March 31, 1961, and they had four children of their own, as well as helping to raise Sandie's baby sister, Debbie. Virgil worked for Coconino County and Kaibab National Forest as an equipment operator until he retired in 2000. So much for retirement, he then went to work with his sons at Omega Concrete in Williams until the day of his stroke.

Virgil went to be with the Lord Jesus on Thursday, July 31, 2008. He was preceded in death by his dad, Bob; his mother, Mabel; and a brother, Richard Curry.

Virgil is survived by his wife, Sandie; four children, Bill Curry (Anna) of Williams, David Curry (Joni) of Cottonwood and Williams, Steve Curry of Williams, Dianah Ness (Erik) of Beaver Creek, and Debbie Rollins of Florida; his two brothers, Harold Curry of Las Vegas, Nev. and Carl Curry of Prescott; and his sister Rosalie Harrington of Page. Virgil has five grandchildren; one great-grandson; and numerous nieces and nephews and cousins.

Services for Virgil will be held on Tuesday, Aug. 5, 2008, at 11 a.m. at First Baptist Church in Williams. Officiating will be Rev. Dan La Paglia of Calvary Church in Seligman, where Virgil and Sandie are members.

Condolences may be left for the family at www.norvelowensmortuary.com. Those wishing to make monetary donations to Sandie Curry may do so through National Bank.