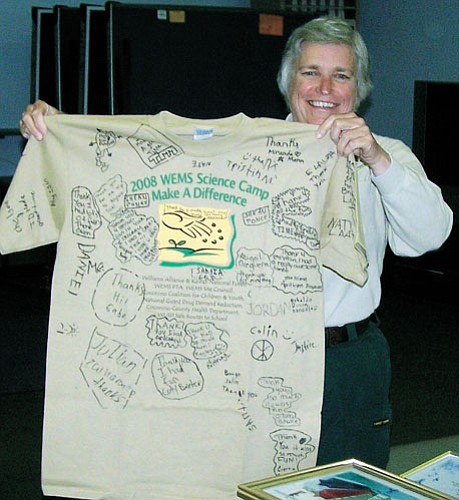 <br>Submitted photo<br> Williams District Ranger Martie Schramm smiles as she accepts a T-shirt designed by students that attended a science camp in April.

The Kaibab National Forest was one of a few organizations and individuals honored for making a difference to the children of Williams.

During a ceremony May 15, Williams District Ranger Martie Schramm accepted a "2008 WEMS Science Camp Make a Difference" T-shirt signed by students who had participated in the camp.

"The science camp was a great opportunity for both the Kaibab National Forest and the Williams School District to get kids more interested in the Forest Service, natural resources and science," Schramm said.

The WEMS Science Camp, which was held in late April, was a two-day program designed to expose sixth graders to science in the Forest Service. Topics included fire, biology, recreation, archaeology, timber and silviculture. Workshops were meant to be fun and interactive, giving students the opportunity to learn and experience science in the field. The science camp also allowed the kids to learn about potential careers with the Forest Service.

"Both the students and the Kaibab National Forest employees learned a lot," Schramm said. "We hope to continue a working relationship with the school district in the future. We also look forward to future opportunities to share applied science with kids."