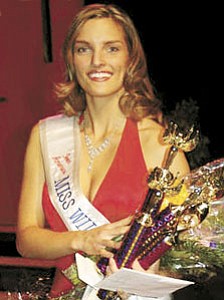 Ellie Krombeen, pictured above and right, won the title of Miss Grand Canyon State during a recent Miss Teen Arizona pageant held in Phoenix. She will go on to compete in the Miss Teen America pageant this July.

Eighteen-year-old Ellie Krombeen is the president of the local Students Against Destructive Decisions (SADD) chapter, vice president of the Williams High School (WHS) student body, and a member of the National Honor Society. The daughter of Sheila and Rob Krombeen was also named Miss Williams Route 66 in 2005.

In July, Krombeen will take a shot at Miss Teen America.

Krombeen won second runner up in the Miss Teen Arizona Competition, held in Phoenix March 15. Approximately 700 attended the popular pageant. Krombeen, a senior at Williams High School, was also crowned as Miss Grand Canyon State during the event. She also won most talented, most community service and most academic out of the 18 girls that participated in the competition. The Miss Grand Canyon State title allowed the directors of the competition to choose Krombeen, as well as one other girl, for entries in the national Miss Teen America competition. The first runner up for the event, she added, will compete in the Miss Teen World competition.

The weeklong Miss Teen America pageant will be held in Nashville, Tennessee, July 26 to Aug. 3.

"It's just like the Miss America Pageant, they have all the preliminaries. They narrow down the top five to where, the actual night of the pageant they don't take hours and hours and hours judging everything," Krombeen said.

Krombeen said she expecting to have a lot of fun on the trip.

"At the last pageant, there were a lot of really neat girls. They were really nice and fun to hang out with," she said. "It's a good experience, to be able to have confidence and go up on stage and be in front of a ton of people. This one's a little harder. You have a 30-second speech in front of everybody. I think it's going to be broadcast. I think it should be a really good time. I think it will be rewarding too."

"We had the interviews the day before and then we spent all day preparing and we had dress rehearsals and all the girls were stuck at Pinnacle High School all day long. That night we had our competition and everyone did really well. I was really proud of everyone," Krombeen said, who played the piano for her part in the talent segment.

"It was pretty close. I beat the actual winner of the pageant by one point. She sang opera in Italian, so I was really surprised when I got that one," Krombeen said.

Krombeen said she hopes to go to Oklahoma City University after she graduates from Williams High School in May.

"It's a really good Christian college with a good mass communications program," Krombeen said, adding that she is considering a career in either public relations or as a news anchor upon completion of college.

A spaghetti dinner is planned to help raise funds for her trip to Tennessee for national competition, though a firm date and location for the dinner has not been set. The trip will cost $3,000 for Krombeen to go on her own, though she is hoping that her mother will also be able to accompany her to the competition.